Whenever a new smartphone is introduced many casemakers already know in advance what its design will be, while others are in a mad rush to get new cases out. This was not so much of an issue for the iPhone 6S because the current range of cases were able to fit, even though the updated model was slightly thicker because of the inclusion of 3D Touch.

Having said that, these casemakers are still working on new iPhone 6S case designs to help tempt people into buying the updated range. Our friends at MobileFun sent us four new cases, one of which will be shown in a separate review. 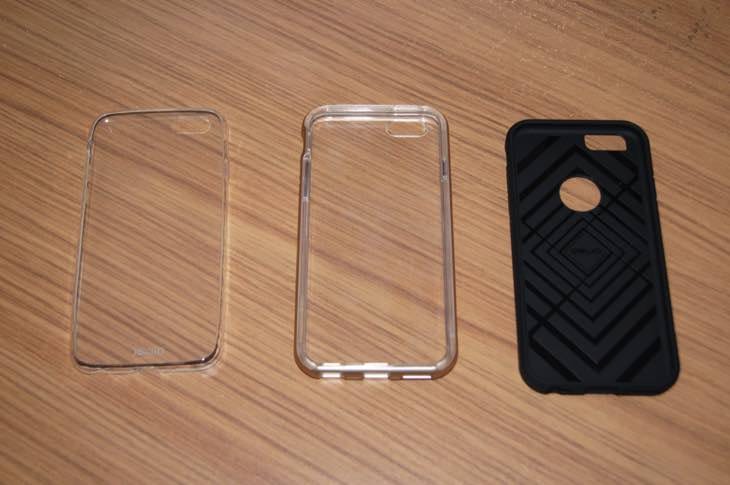 Those three cases are the Encase Ultra Thin FlexiShield iPhone 6 Gel Case, the Obliq Flex Pro Case for the iPhone 6 and 6S, and also the Spigen Neo Hybrid Ex Bumper Case in Champagne Gold. These three cases vary in terms of price, as well as their quality and usefulness. 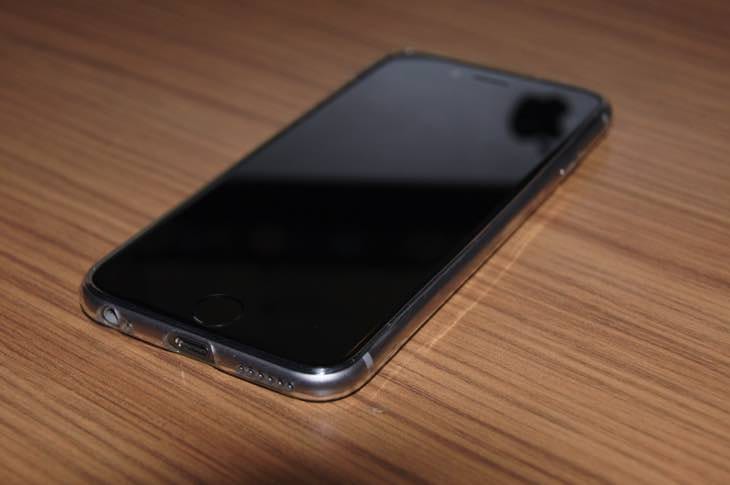 If you love to protect your phone from scratches but hate covering it up or making the device look too bulky, then the Encase Ultra Thin FlexiShield for the iPhone 6 and 6S could be just what you are looking for. It’s made from a strong, durable silicone, which is also flexible, making it easy to put on and take off. 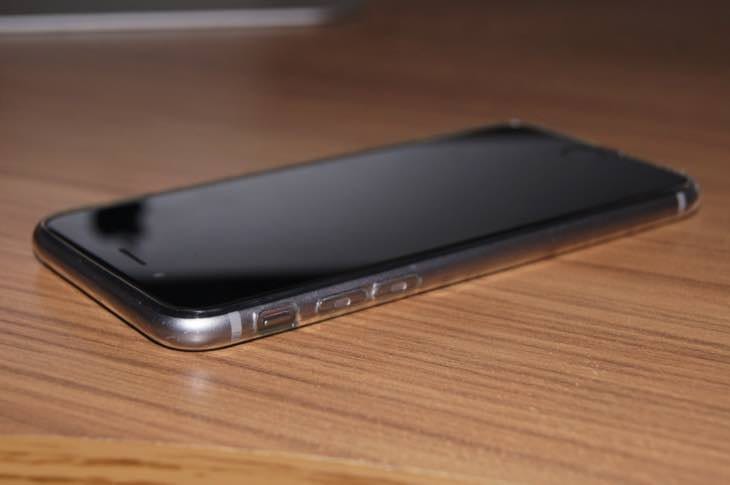 We did not have too much hassle putting that case on, and thanks to its non-slip coating there is never the fear that your phone will slip out of your hand. We spent a day or so using this case and it was certainly a nice feeling knowing our iPhone was protected, yet it hardly felt any bulkier in the pocket. 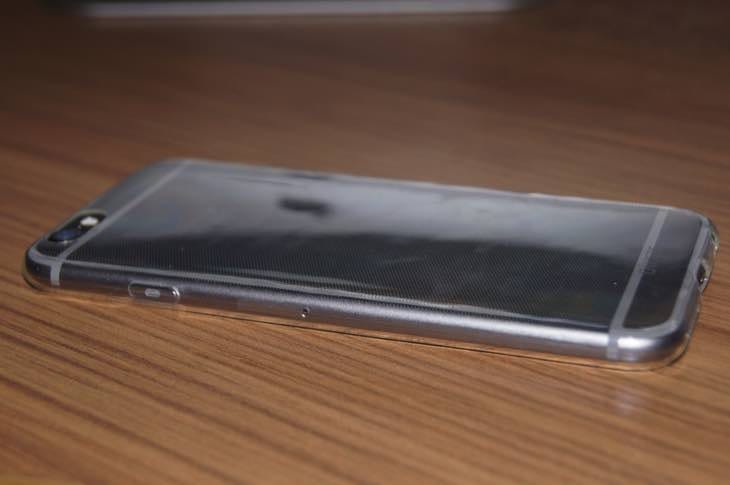 There was a time when my hand was wet and had to answer the phone, and so was amazed that the description of it being non-slip was actually correct, and if anything seemed to offer more grip. There were however a few issues, one is that it shows the fingermarks so much more on the back of the phone, and also the fact that we have heard a few stories that after a while this case begins stretch a little — like the original iPhone bumper cases in that respect. However, for just £7.99 on MobileFun it’s just a small issue that may or may not happen for you. 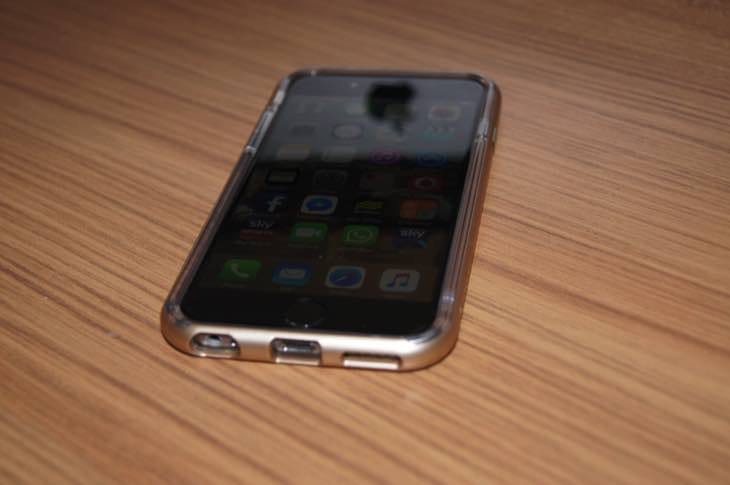 If you are looking for a case that offers similar thinness, but also adds a further bit of protection, and also quality and sturdiness, then you may want to consider the Spigen Neo Hybrid Ex Bumper Case for the iPhone 6 or 6S. Our particular case sent was in the Champagne Gold. 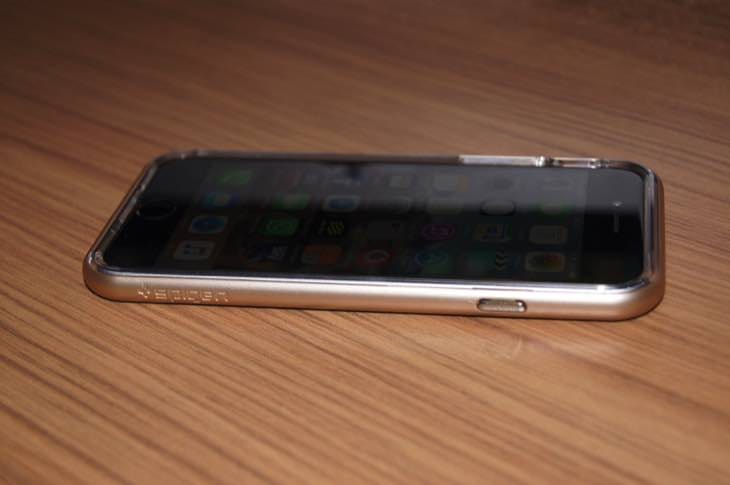 There is not much to this case, although its simplicity is one of its greatest traits. You have to remember to take the plastic bumper off the main case body first, or you will not be able to place it on your iPhone. We found this out the hard way because we had a mental blank. 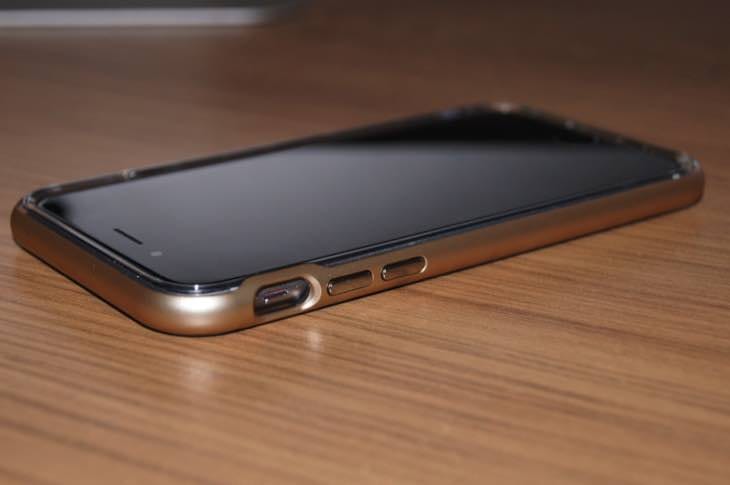 However, once on this did add a nice feel to the phone, which is also due in part to the metalised buttons for the volume up and down, and also the power on and off button. There are similar cases with rubber buttons, but these take away that quality feel you are used to from Apple products. 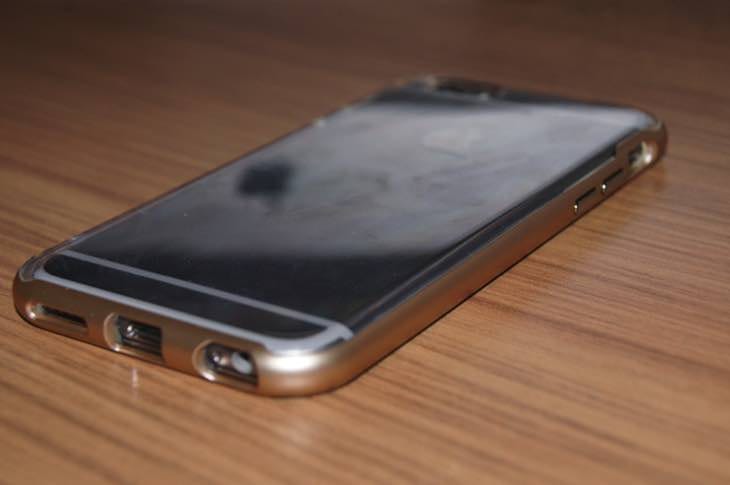 We also found that this case did not feel too bulky in our pockets, although suffered the same issue as the clear case above, and that was how the back showed the fingerprints too much, and so made the phone look a little grubby — don’t eat anything greasy while you are using this case, as the finger smudges are a little tough to get off. 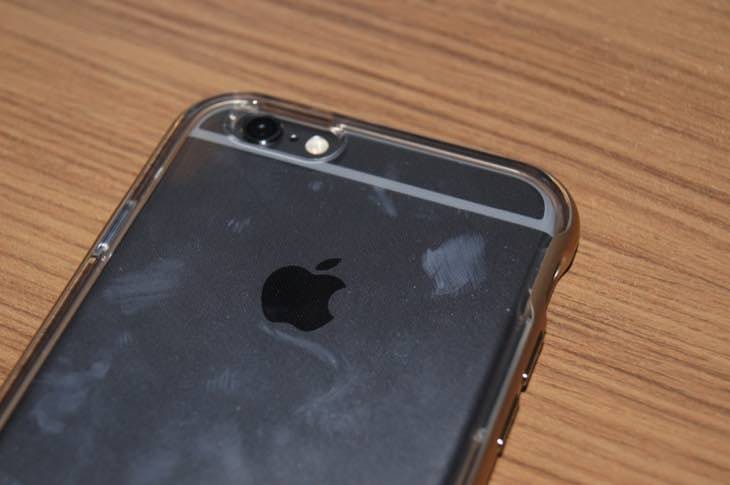 Overall though, we did prefer this case over that one above because it just seemed to add that bit more class with the colored edges and those metal-like buttons. 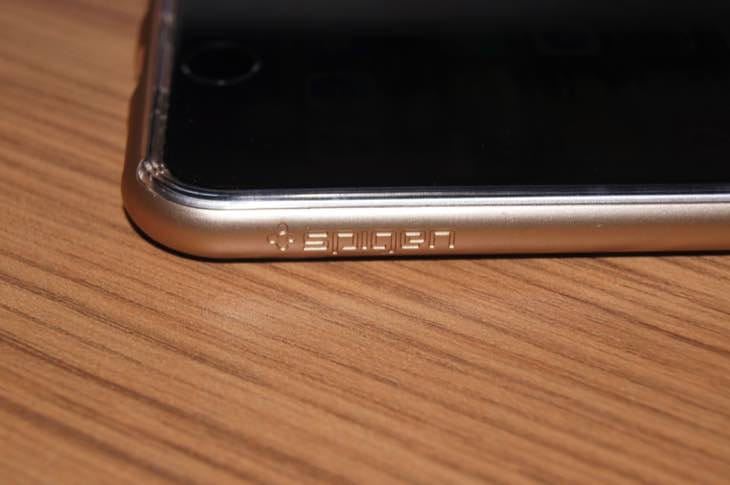 The different colour options available to you at MobileFun are Champagne Gold, Mint, Electric Blue, Shimmery White and Rose Gold. The price you pay from the UK’s number one phone accessory website is £17.99. 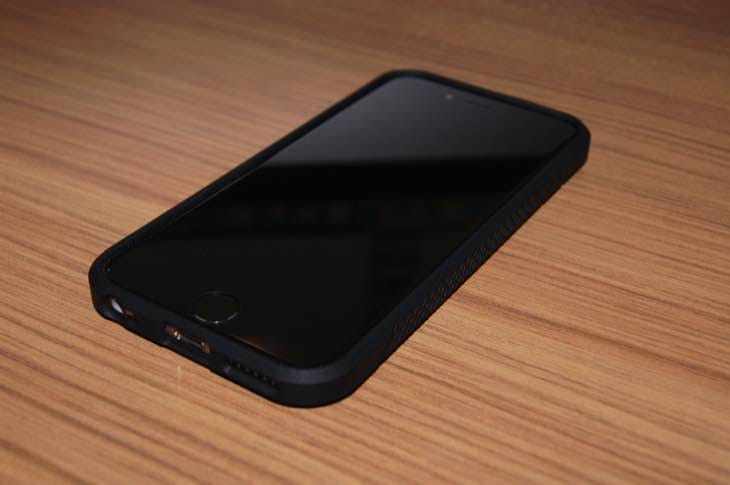 Who says you have to over do the thickness of a case to provide a great deal of protection; The Obliq iPhone 6/6s Case Flex Pro Series is proof of that with its form fitting jelly design? The material used is strong, yet still flexible and very light, and so hardly adds any more weight to your phone — something that is often an issue with such cases. 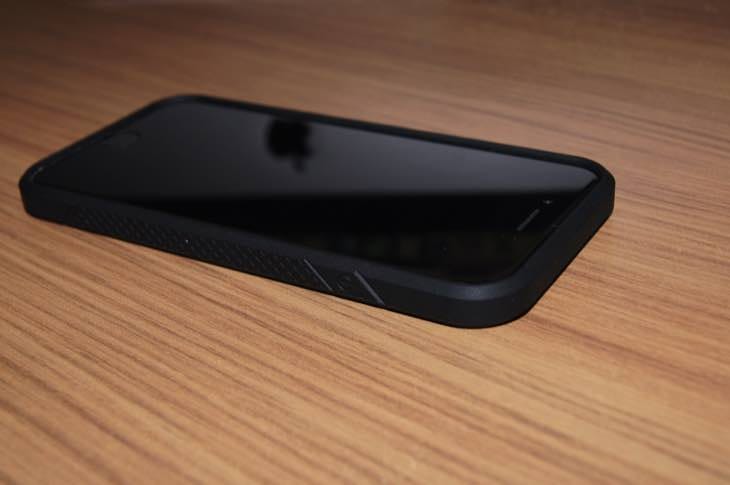 Getting this case on was the easiest of the 3, it just slipped on with ease. On either side there is added grip with diamond shapes molded into the design. There are also the same shapes on the back of the case to the top and bottom, although made from a harder material. We can only assume this is for allowing the case to grip on certain surfaces so that it does not slip.

We’re told that the material used is also strong and so can resist shocks and scratches — although we did not want to put that to the test. However, we are certain there are several videos on YouTube to test that theory. 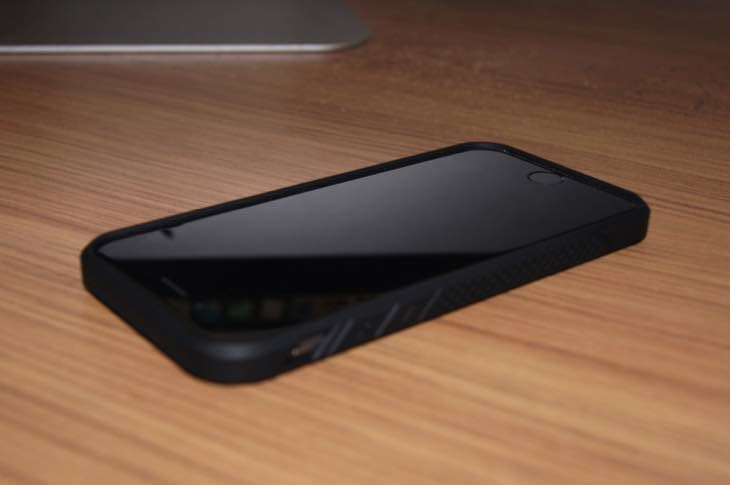 Even though the button covers are made from the same soft jelly as most of the case is, they are easy to press and very responsive and comfortable to use. After using this case for a day we did get the feeling that it would not offer a great deal of protection if dropped from a certain height, and that the non-slip rear cover is not as good as we are led to believe. Yes, it does stop the phone from slipping on certain surfaces, but only just — although still a nice touch. 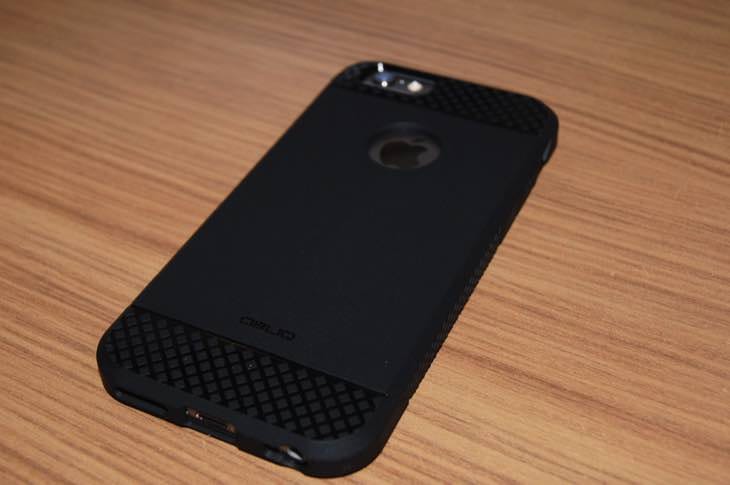 There are four colour options with this case, and those are Black, Mint, Navy and Pink. MobileFun is currently selling this case for £19.99.

If these three iPhone 6S cases are not for you, then MobileFun has a huge choice available for you to purchase.