Logitech were kind enough to send us two cases to review, one for our iPad Air, and the other to test out on our iPad mini. We don’t have the Retina mini, but this isn’t an issue seeing as though they are both the same size and so either version will fit into the case. The first case is the Big Bang for Apple’s larger tablet, and the Hinge for the smaller model.

Keeping our iPads protected is very important especially when you consider how fragile they have become seeing as though they are so thin. We currently just have a cheap case on our iPad Air, although it isn’t the best solution. However, the iPad mini has something a little better, the BUKcase Originals case, which we reviewed back in April.

The Logitech Big Bang case offers iPad Air owners greater peace of mind thanks to its impact protection while staying thinner and lighter than some of the cheaper Chinese counterparts. The packaging that this case came in is rather impressive, but we have to wonder if too much emphasis is being put on it. Having said that, if this is the only way to protect it while in storage, then we fully understand — just wonder how much such packaging costs?

Most of that is forgotten the moment you take the case in your hands because it reminds us just how good Logitech is with those third-party accessories. The build quality is very evident from the start, although there was one minor issue, which we’ll get to later.

Placing the iPad Air in the Big Bang protective case was a simple task thanks to the shock-absorbing flexible inner section where the iPad sits in. We have come across many cases that are so tight that they feel as though they will scratch your tablet, but there is no such issue here. 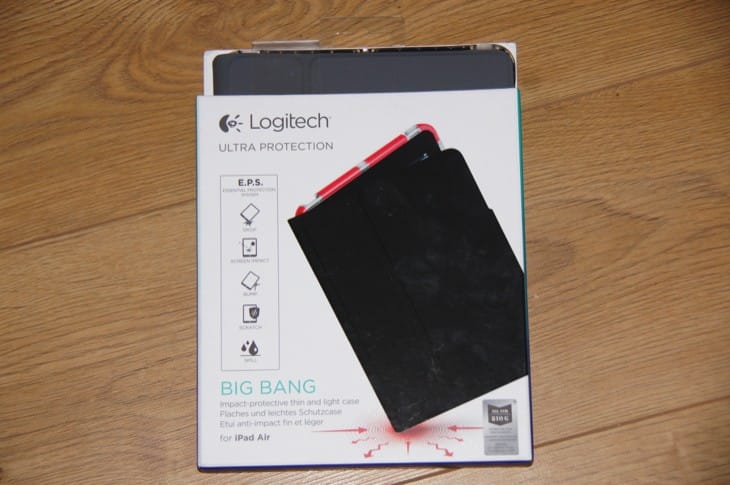 You may not notice this at first, but there are four parts to this case, which can be seen on the Logitech website. All of these materials help to protect your Air from accidental drops, spills, scratches, minor screen impacts and bumps. It has taken some clever engineering to achieve this, but we think you will be happy with the outcome. 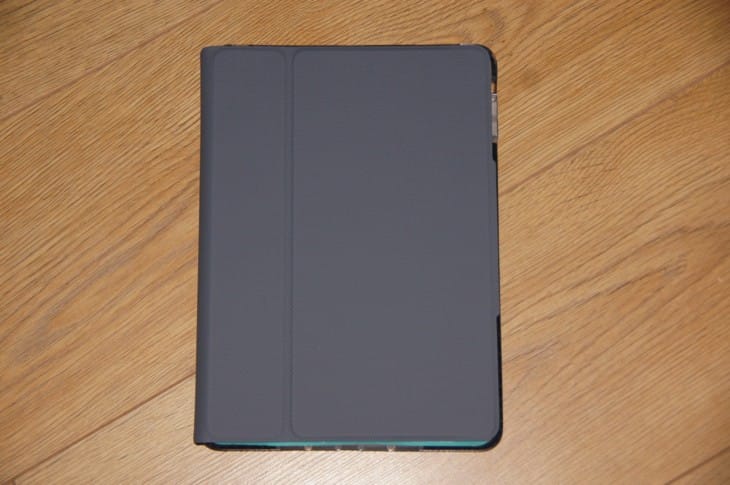 We did put a few of these claims to the test, and were pleasantly surprised, although wasn’t brave enough for a drop test. Some similar cases do not offer you the ability to view your iPad at multiple angles, as we know this comes in handy for various tasks. Having it flat is ideal for browsing, and having it standing at a slight angle meant we were able to watch videos thanks to an improved viewing position. 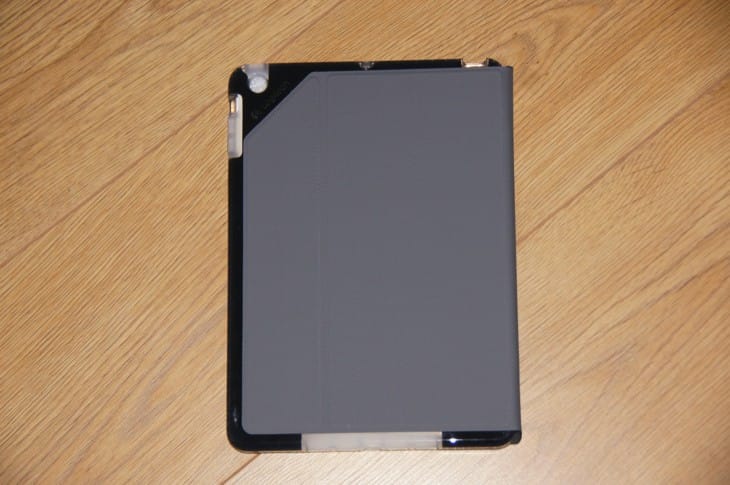 Even though you have all that added protection, the camera, microphone and charger holes are not impeded. The addition of a magnet means you now have auto-wake and auto-sleep, which does come in handy. 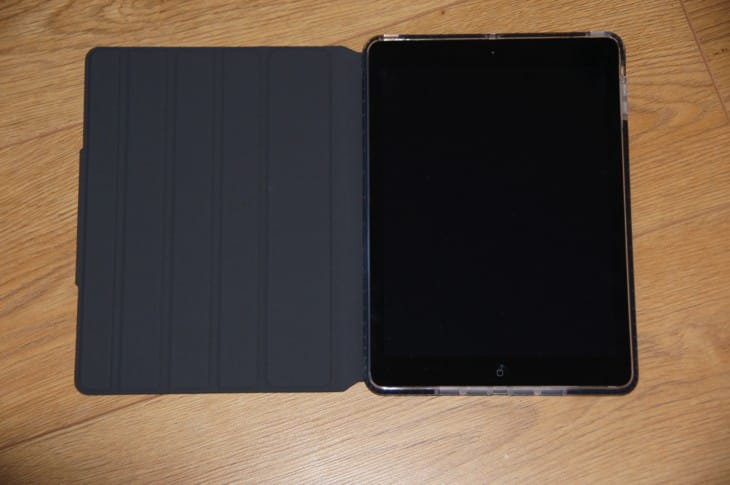 Going back to the minor issue, well two now. The first is that the case takes away the lovely slim design of the iPad Air itself, and the second is that when you close the front cover to protect your iPad, it begins to slide away from the edge, which means it does not sit flush, which becomes rather annoying, especially if you were to accidently splash something on the front. You can see an example of this in the image below. 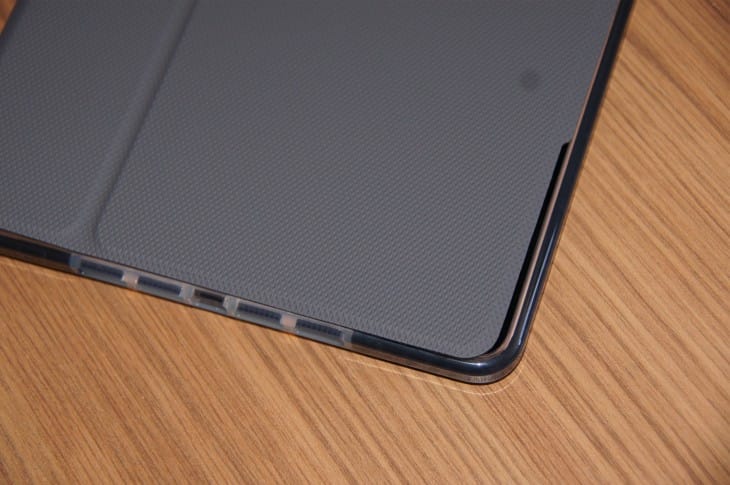 These are just two small problems, and should not put you off buying the Big Bang case for the iPad Air. The price for this case is £79.99 and can be purchased direct from Logitech.

Logitech’s Hinge flexible case with any angle stand for the iPad mini is stunning in design thanks to its use of a stylish fabric. This also had the same style packaging, although it is starting to grow on us because it shows what a premium accessory you have in your hands. 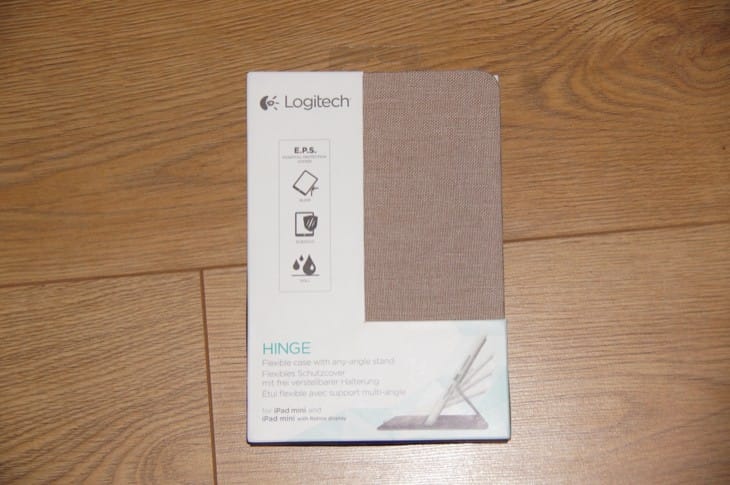 Again, placing the iPad mini inside this case was so easy, although removing it was a bit tricky because you are weary of scratching the paint on your Apple tablet. Having said that, I don’t plan to remove it from the case very often seeing as though it offers greater protection than our current case being used. 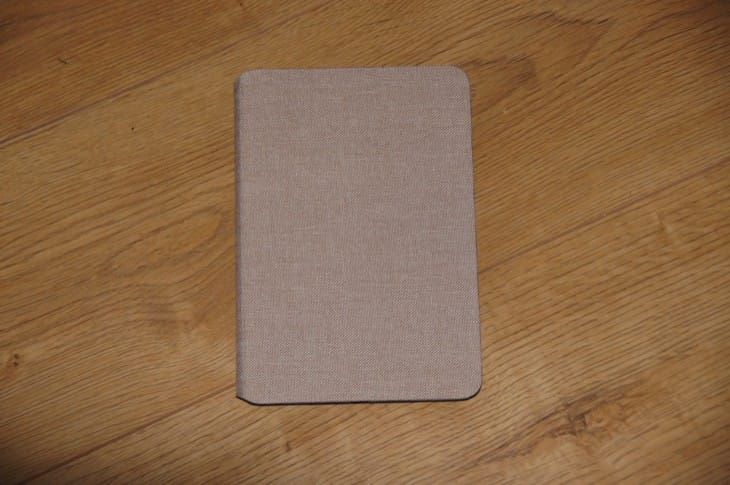 Logitech has used the same E.P.S used in many of its other cases, which as many of you know stands for Essential Protection System. What this actually means is that your iPad mini is now protected from bumps, scratches and spills. 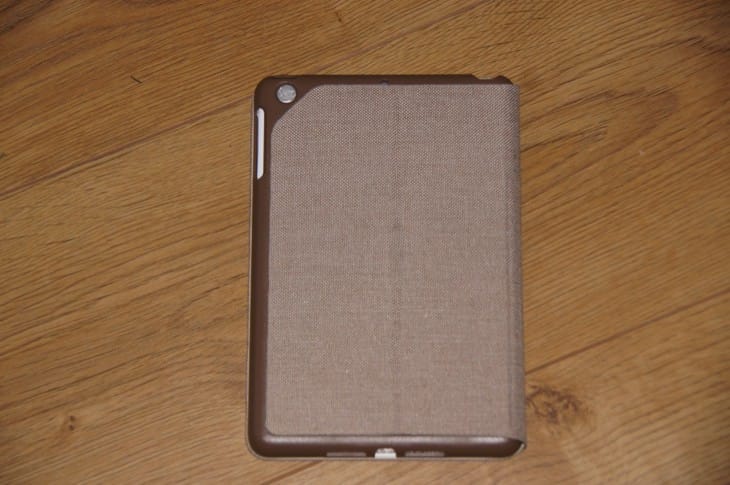 If that stylish material was not on the front, then this case would look like the hundreds of other generic cases we have seen on the Internet. I really do love the front and rear cover, which also forms part of the hinge mechanism. 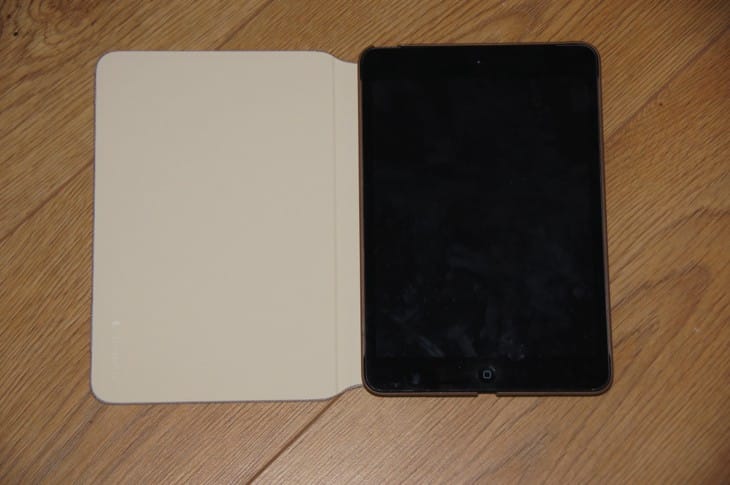 The reason why this case is called Hinge is because of its smooth-gliding hinge that allows you to view the iPad mini in several different angles. I was a bit weary at first because adjusting the angle did seem a little stiff at first and thought it would snap or something. However, after a few times it got easier and you knew that it will withstand adjustments time and again. 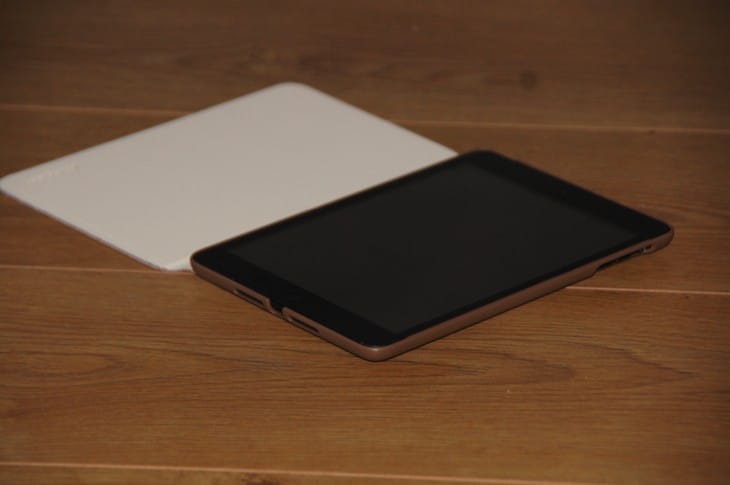 Once you have found the desired angle you do not need to slot it in place, as it just stays where you put it, which does make the process so much easier.

We can’t seem to find anything wrong with this case because it does exactly what it says on the box, and if you are not a fan of the brown color of this review sample, there is also grey.

If you are interested in this case, then head over to Logitech, where you will be able to buy it for £49.99. 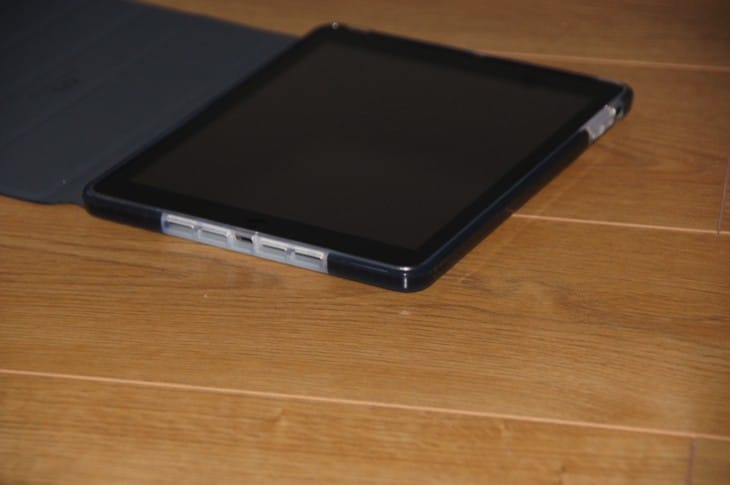 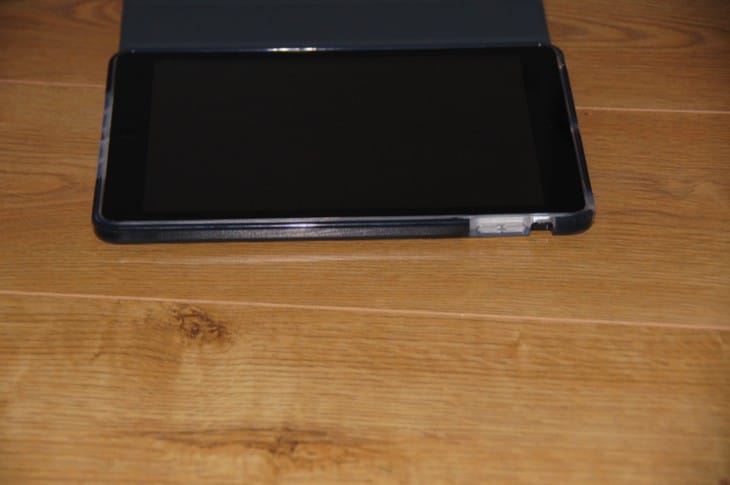 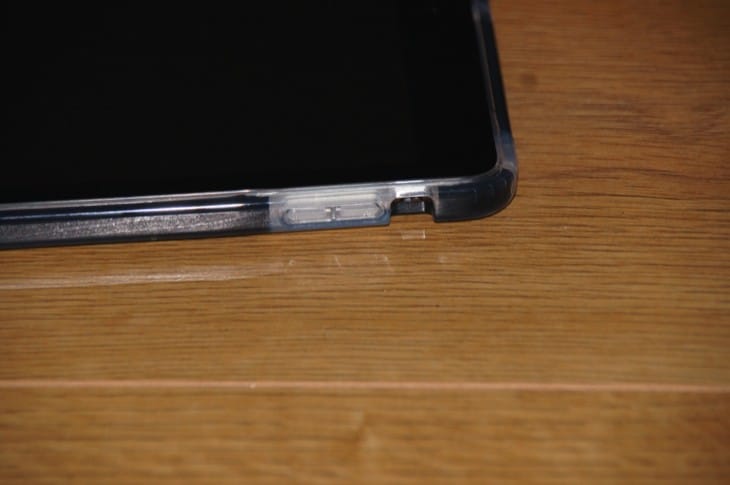 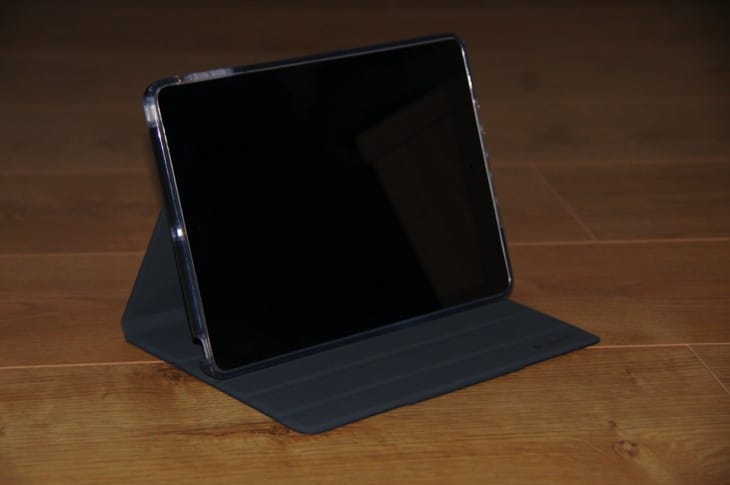 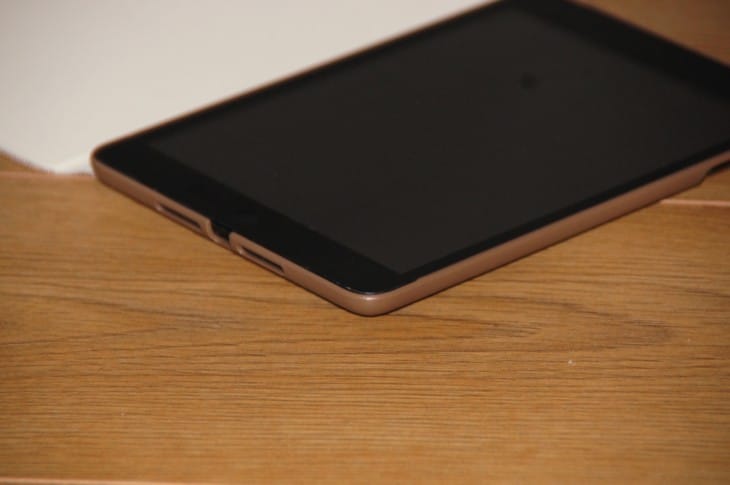 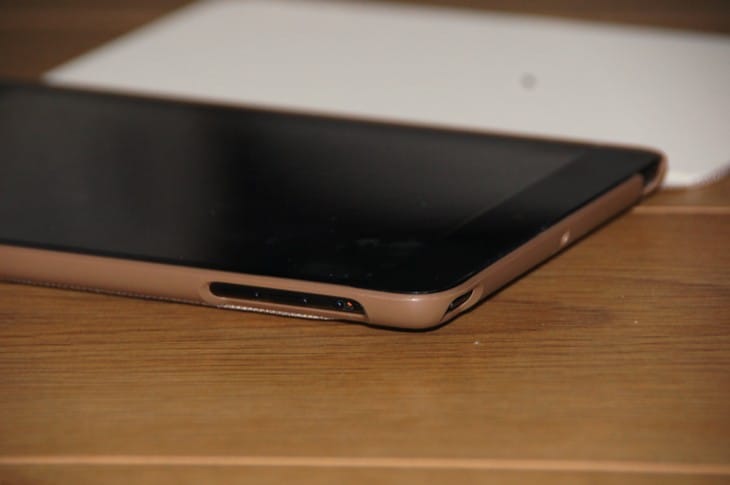