If you’re looking for a cool new game on your PS4, then there’s not much to dislike about God of War 4, in fact not only do we love it, the game has received some of the highest rated reviews for action-adventure games in 2018 so far!

It’s a fresh take on the God of War series and showcases HDR graphics, perfect if you’ve recently upgraded your big screen TV to 4K HDR. 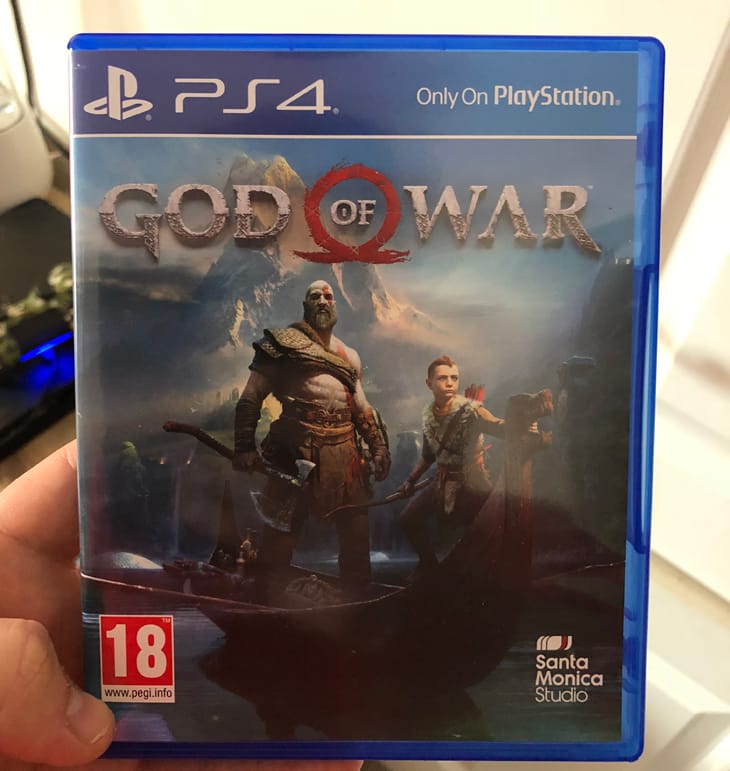 Tesco at the time of publication has 4 SPECIAL OFFERS on PS4 console bundles with God of War 4, seen after scrolling down the product page slightly, these include both the Sony PS4 Pro and standard models. 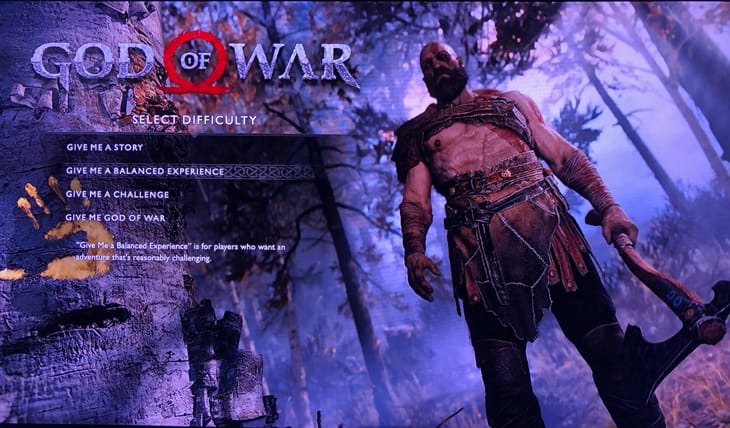 God of War 4 First Impressions – We haven’t played the game all the way through yet, but after getting hands-on for a couple of hours, we are extremely impressed.

It’s one of the best games right now in its class for HDR graphics, has some great combat options, a story that many will find emotional, and many layers of customisation. There’s not much to find negative about this title, and it’s a massive step up from the original God of War game that released on PS2 well over a decade ago. 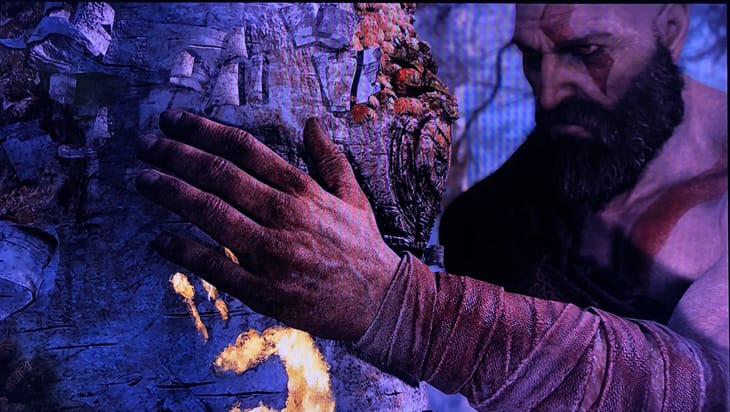 If you’ve followed the franchise and Spartan warrior Kratos, then this is a MUST for you, although if this would be your first time playing God of War, you’d equally find it addictive and an emotional journey.

The game is much more relevant now when compared to its first few releases all them years ago, it’s much more than just button bashing. You’ll find clever puzzles to figure out, great customisation, a nice graphics boost, and fast pace. 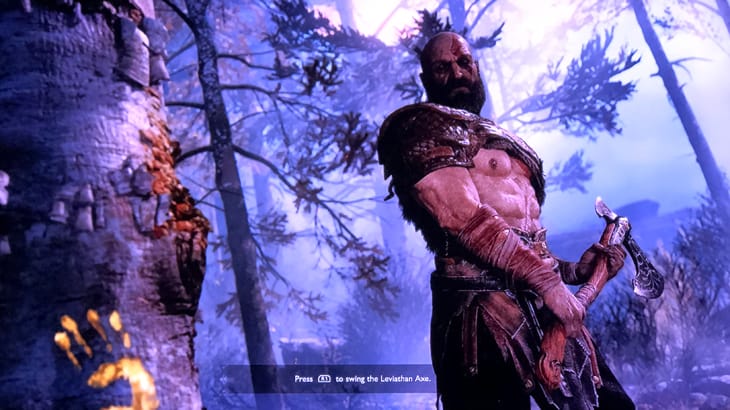 You will start the game living as Kratos, but his new life includes a quieter setting and a young son, different from the original trilogy after he satisfied his goals against the Greek gods. Without spoiling the game too much, his quiet life doesn’t stay perfect for long! 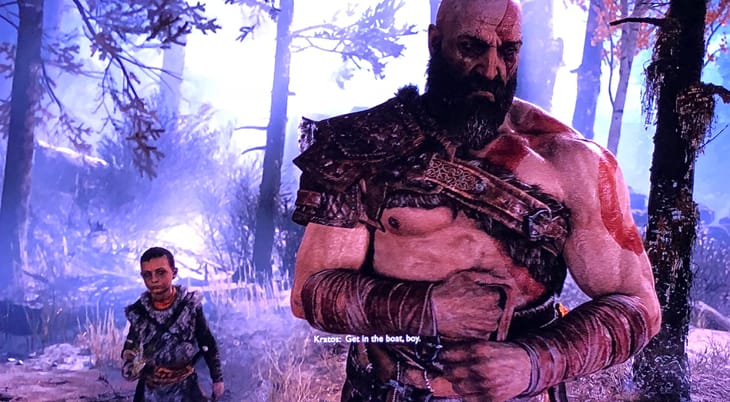 There’s a new setting in the realms of Norse mythology and gameplay has adjusted with this change. In fact, the way you view Kratos is different thanks to the new over-the-shoulder 3D perspective. This is one element some might not like, although we embrace this change and really like it.

Kratos looks so much better know, thanks to both graphics improvements and being able to see his more defined muscle mass. It’s the first thing you will notice along with the amazing scenery from this era. 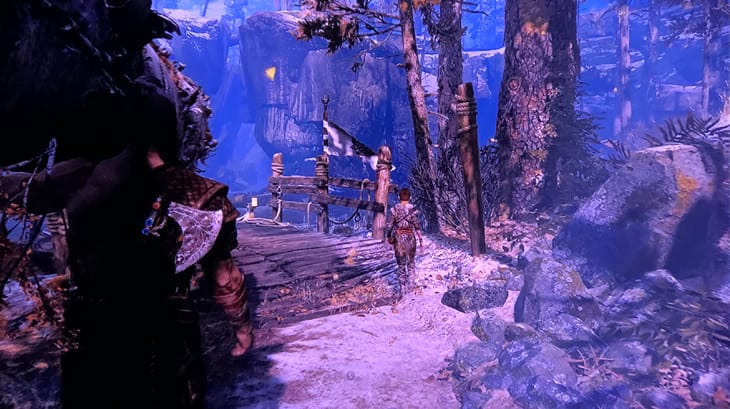 You will love the vibrant colour and if you are not playing on a HDR 4K TV, we suggest you consider getting one for the improvements, as God of War 4 is the best game yet to showcase these enhancements (we also saw some good deals on 4K HDR TVs at Tesco Direct while looking at the bundles). 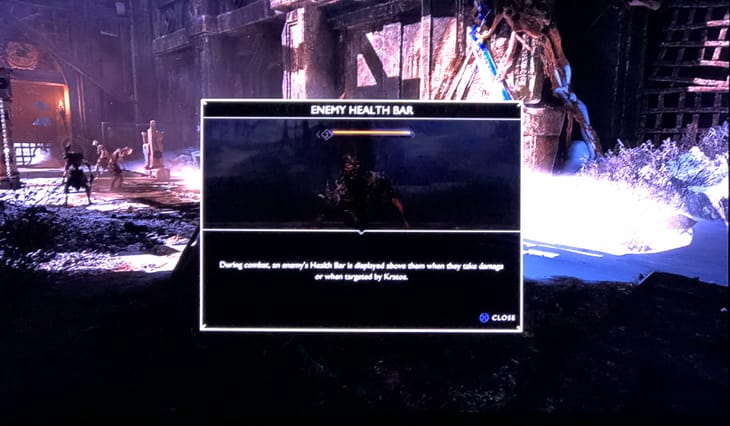 Not only is the surroundings amazing, as you play out the game, but also the dress of the theme too! Some amazing tattoos, fur-lined leather, and armour combinations. The latter is where this game really shines as well, lots of customisable weapons and armour is available to purchase or can be found throughout the game. 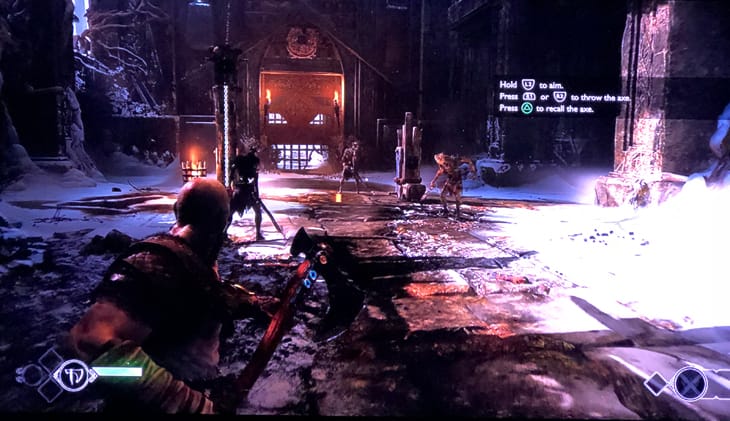 You’ll quickly discover plenty of strategy available with weapons and armour, especially due to the fact these can be upgraded or purchased for both Kratos and his son. 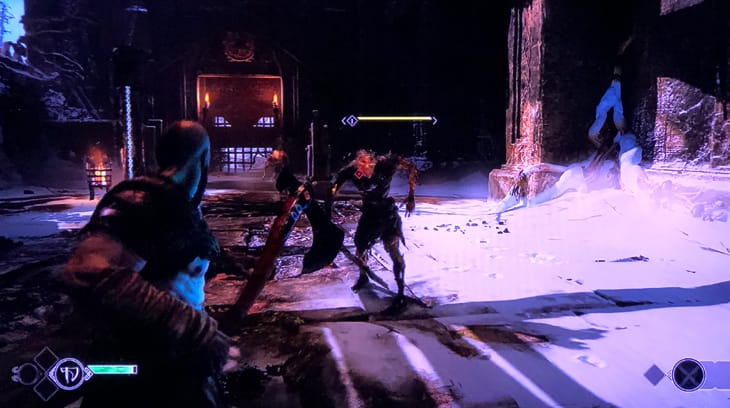 Improving the stats for both Kratos and his son is vital. These include upgrades to strength, luck, vitality, defence, cooldown, and runic. 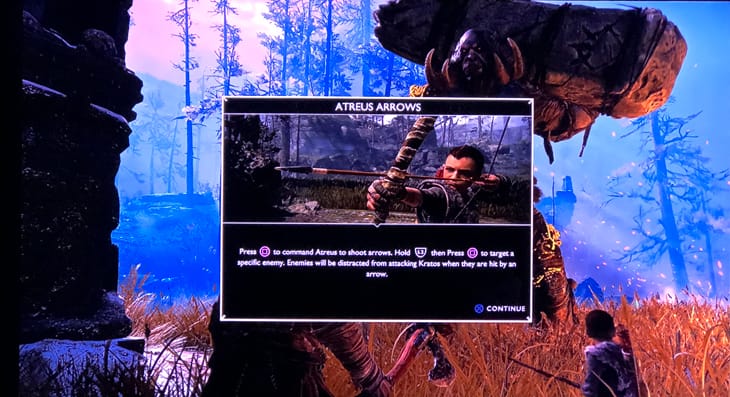 A great tactic is to get Kratos son to shoot arrows at enemies while you attack them with melee, a great way to play when starting out. Later on you will change tactics after developing the add-ons and really deep skill tree system. 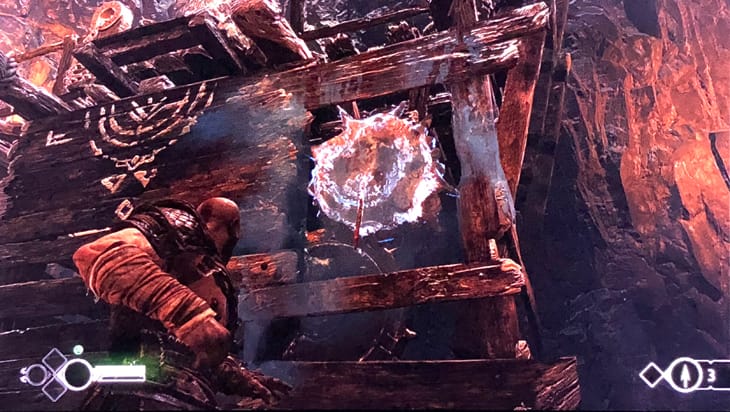 As with many games before it, you’ll find God of War 4 has hidden power-ups and other items that will be located throughout your journey. Finding these is part of the fun, so don’t miss out! 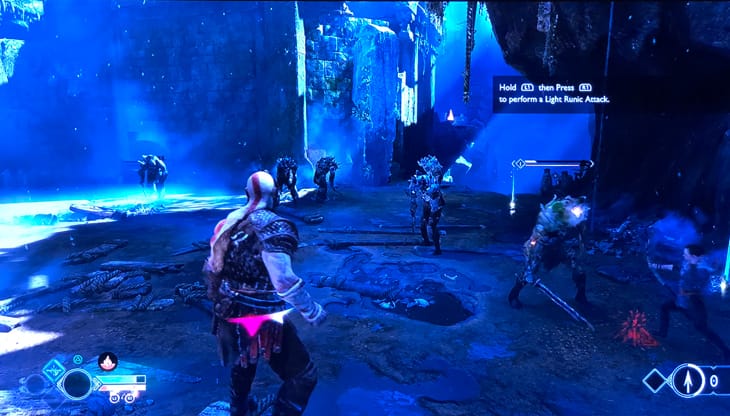 It gives you a reason to explore the open-world maps other than the main objective, just like we’ve done in other open-world games, you can easily spend many hours just wondering around looking. 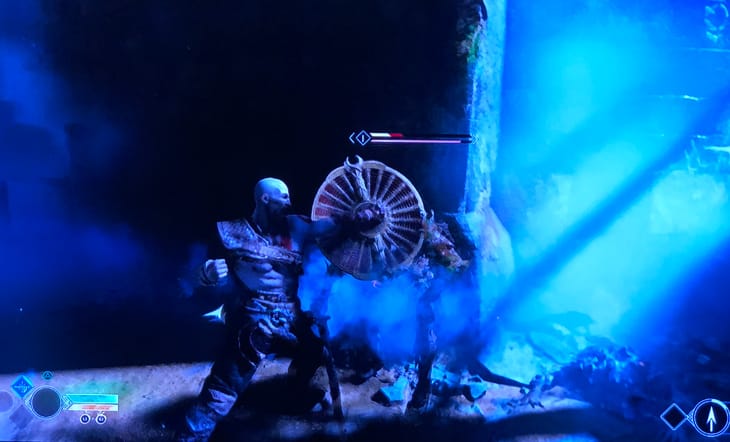 You will meet lots of bosses and these will be defeated by looking for weak points, just as before. Look for the patterns and then use this against them, for a much easier battle. 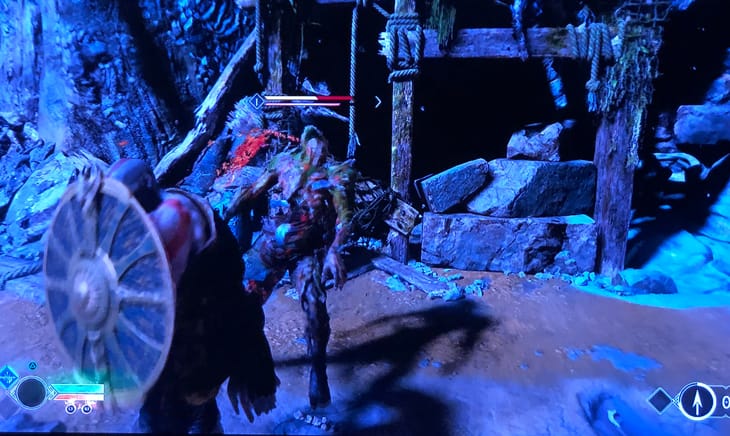 The bosses will get harder as you progress through God of War 4, although with plenty of upgrades, your skills and weapons should improve also to make fighting the bosses not too hard, well you’ll hope so anyway. Just spot the weaknesses and use those powerful moves along with combos for success. 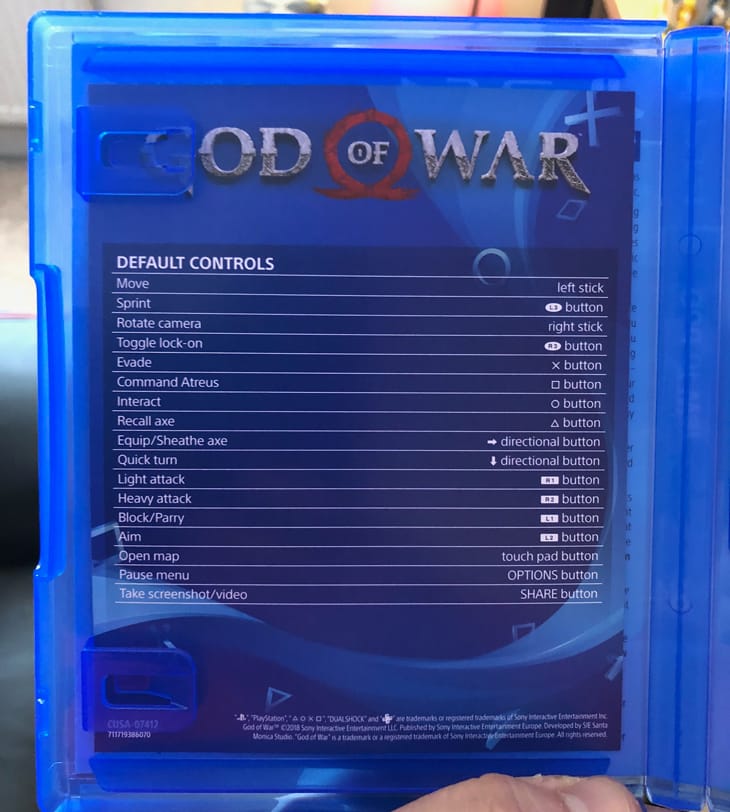 Bottom-line: This could easily be the Game of The Year, it’s really impressive and will deliver hours and hours of fun. God of War 4 has the great graphics we’d expect in this generation along with gameplay to match, both fans of the franchise and newcomers will find it easy to love. The story is emotional too, so enjoy!