To some people the thought of an RC Helicopter is old news because of the popularity of the Quad-Drones, but there are still those old school people out there that much prefer to fly these small helicopters because they just seem far more fun. We have been lucky enough to be sent the Camstryker RC helicopter with camera by Invento from our friends at reichelt for us to give it a hands-on review.

The packaging is nothing really special, although you can see everything that is inside, such as the helicopter, the controller, and all of the other paraphernalia, which includes the charging lead, a USB key, a memory card, a screwdriver and spare blades. Not much is given away on the front of the box, but you can see on the rear that more details are shared, such as that small 512MB SD card that slots into the helicopter itself, which is needed for when taking images with the built-in camera in flight. 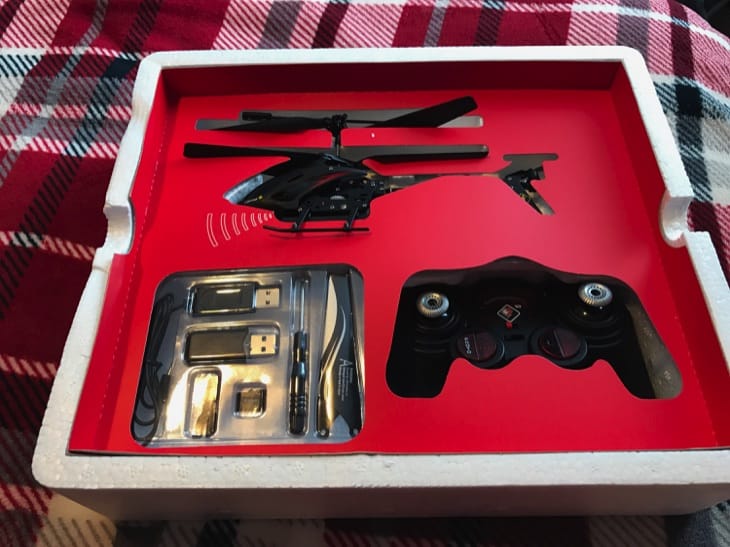 On to the RC helicopter with camera INV 500014 itself, which is a four-blade design and has a front-mounted camera and a controller that looks very similar to that of a PlayStation controller. It takes 6 AA batteries, which does not come with the controller, although these are only cheap. We did have some trouble getting these in because no sooner had we put some batteries in, they would pop out again, and so took several attempts – so please remember this. 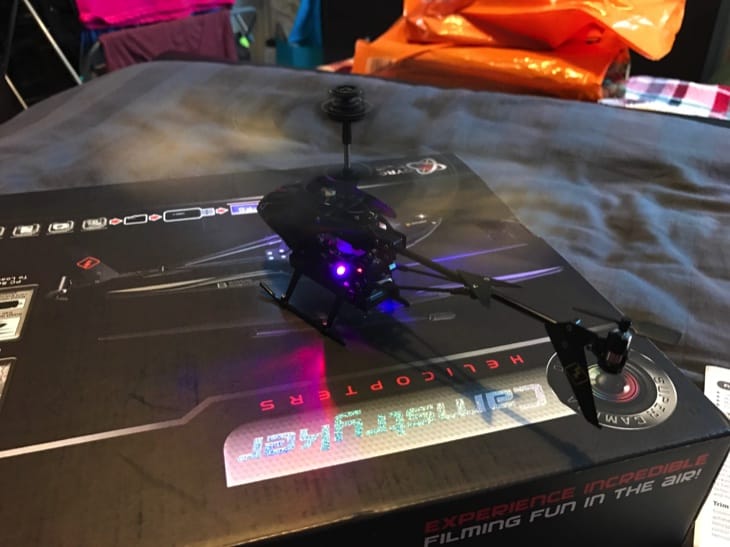 We did get a bit carried away at first to try and test out the helicopter, but after a minute realised that we needed to charge the helicopter up, which takes up to an hour. The only issue here is that you only get up to 8 minutes of flying time – considerable less when getting use to this device because you will be making far too many corrections. You can either use the controller to charge the helicopter with the lead provided, or plug the other end into a USB wall charger socket. 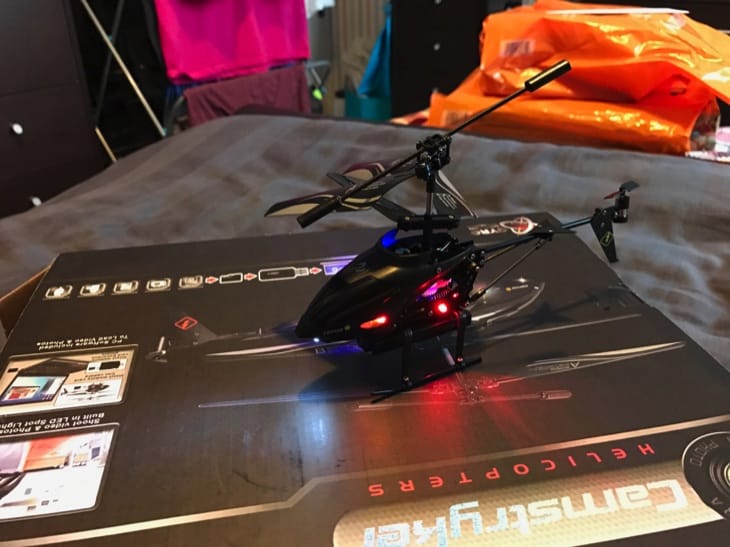 Don’t do what we did, fly the Camstryker RC helicopter around for several minutes, and then realise that you did not put the memory card in – so make this one of the first things that you do. 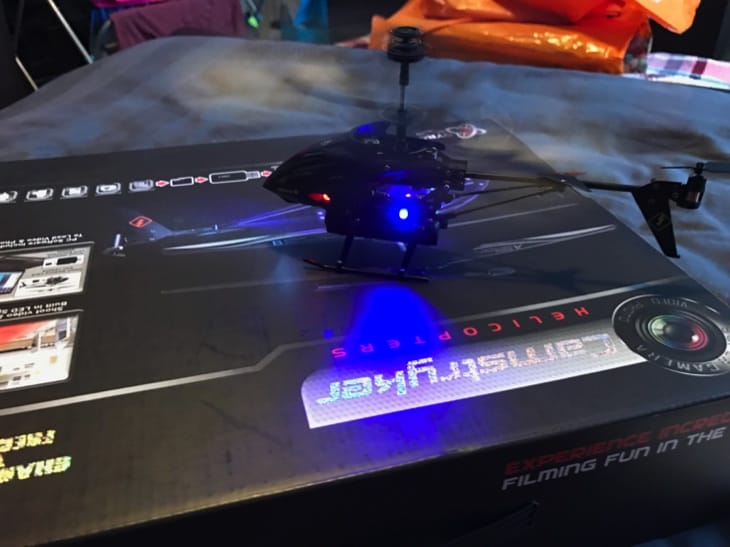 You will see by our images that we did not do too much testing of this RC helicopter with camera from Invento in fear of crashing it, as we have never tried such a device before. However, we did give it a little go, but was hard to get actual footage of it in flight because there was no one else around to take any photos. That being said, we will tell you that if you have never flown such a device before, then you will find that it will want to fly forward very fast rather than hover slowly while increasing in altitude like we expected. 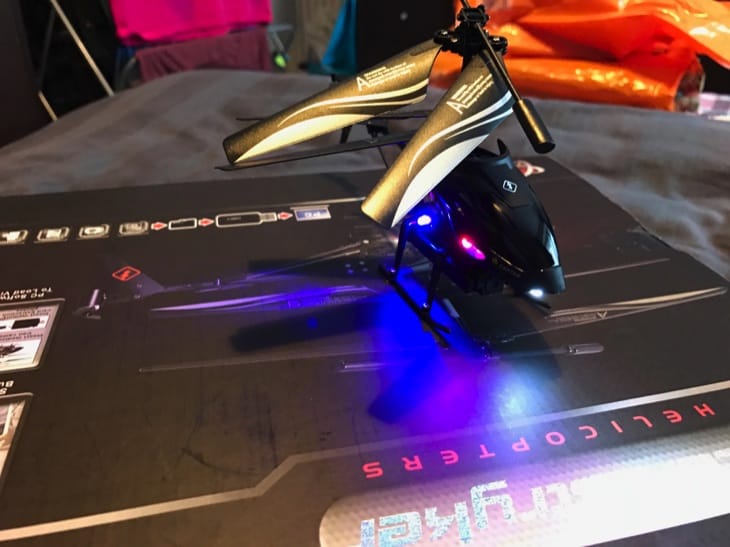 We did find out the hard way that seeing as though the controller is only infrared it only works indoors or outside when the sun goes down, and so does limit what you can do with it. Just a word of advice to get more flight time, and that is to not have the lights on during the day. There are so many controls to flying this and it really does take some time to get use to it, such as the trim buttons if the helicopter does not fly straight. Speaking of the controls, it’s a 3-channel system, so you have the throttle, direction, so left, right, up and down. 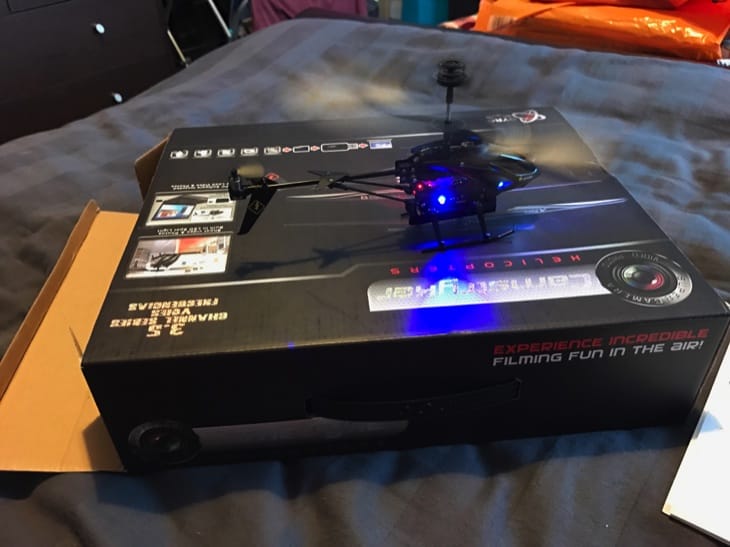 This helicopter is ideal to use in the office, as you can have some laughs with your co-workers – especially because of the SD camera. This is also great if you have kids or pets because they will find this very interesting. However, if it’s more about filming for you, then we would advise against this model because the quality of the camera is just not up to scratch. Still images are also blurry, and so like we say – this helicopter is more about having some fun rather than anything else.

For a better idea of how this Camstryker RC helicopter flies we have come across some video footage on YouTube for your viewing pleasure below. In terms of where to buy, you can head to the reichelt, online electronics retailer, with many products up to 20% cheaper than elsewhere in the UK. The price you will pay is £44.74.