The day we thought would never come is here at last as Zumba Fitness is finally dethroned after a ten week reign at the top of the UK Games Chart. 505 Games’ dance title was beginning to look quite comfortable, with the lack of new releases meaning it had been number one already longer than it should have, until Deus Ex: Human Revolution came along that is.

The action RPG from Square Enix has taken the top spot across all platforms and deservedly so. It is the first AAA title for a while and was hotly anticipated, so entering the chart straight in at number one was inevitable. According to CVG more copies were sold on the Xbox 360 than on the other platforms, with a 57% share of the total sold. Reports have also suggested that Deus Ex is expected to be nominated for several game of the year awards by December also.

Deus Ex: Revolution is the third title from the Deus Ex series and is a prequel to the original game. Players take the role of Adam Jensen, security chief for a company called Sarif Industries. After a security breach he is forced to undergo surgery making parts of him mechanical and embarks on a quest to find out who is responsible for the breach.

Other titles that made an impact on the UK Games Chart this week were Rugby World Cup 2011, which also debuted and managed to enter straight in at a respectable third. Zumba Fitness only falls to second place despite being out sold this week and another noteworthy bit of action was Call of Duty: Black Ops moving back up to fifth after being eighteenth, presumably due to price drops and the Rezurrection map pack.

Do you think Deus Ex deserves the top spot? What are your thoughts on Zumba Fitness’ incredible reign? 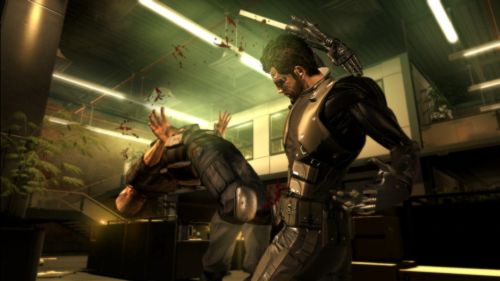