You may have heard of the YikeBike before, if not prepare to be amazed. The YikeBike is a foldable electric bicycle that travels at speeds of up to 15.5mph and will go on for about 6 miles off a 40 minute charge. The product was announced September 2009 and has since been tried and tested by various companies.

The design is similar to that of a Penny-Farthing, where it has a big front wheel and tiny back wheel. Unusually the handle bars and controls are place behind you while the pedals are down below on the large front wheel.

The news we have today is that YikeBike have announced a new extender battery backpack that will allow you to ride your electric bike for another 6 miles before having to charge up. The backpack contains a second battery that is easily carried around and can be directly hooked up to your foldable vehicle.

A second battery can also be carried if you were planning a long journey. The extender battery backpack can be yours for $229. More details about the YikeBike and the extender can be found at YikeBike.com including the price of one of these foldable bicycles.

What do you think of the YikeBike? Will you be getting an extender backpack for yours? Let us know in the comments. 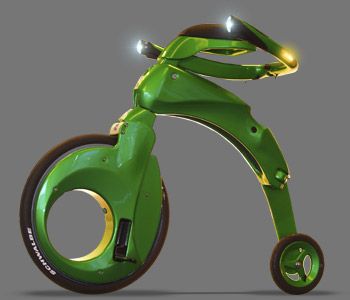