This week has caused some confusion for Destiny players, with many asking where is Xur around an hour ago, or why hasn’t Xur appeared in the tower.

Don’t forget though, USA timezones made the switch over to Daylight Savings Time last week and this of course also affects what time Xur shows up.

As a result, he will now appear one hour later than last week – so that means 2am Pacific time and 5am Eastern Time. In the UK, he will still appear as scheduled at 9am GMT since the UK clocks have not gone forward yet. 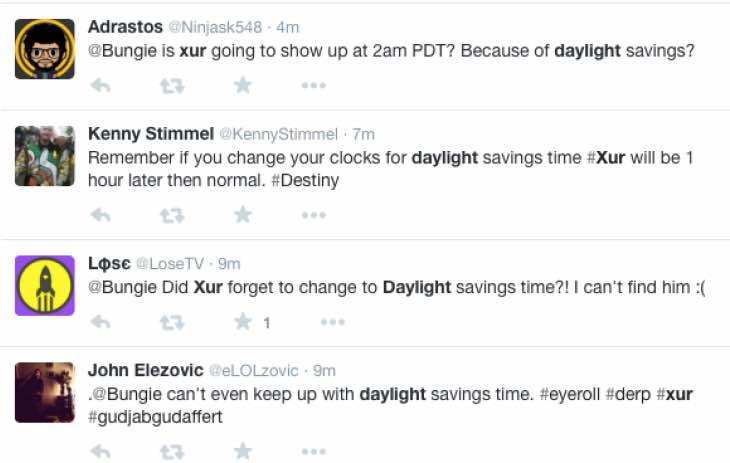 Then again, was this always the plan for Xur’s spawn time today or did Bungie simply forget about the Daylight Savings Time switch as well? Many players are asking the same thing right now on social media.

Either way, Xur is now spawned in the tower and you’ll find him down the middle next to the Vanguards. Xur is selling the Red Death pulse rifle as the main exotic this week, which means that rumors suggesting that the Universal Remote would be sold again were untrue.

Other times in Xur’s inventory for March 13 include the Claws of Ahamkara and the Insurmountable skullfort. Watch the video below to see his full wares today and as always, give us your reaction below.

Were you confused with Xur’s spawn time again and did you already start to search for Xur one hour ago? Do you think Bungie forgot, or was it always planned to be one hour later with the DST timezone change?