The Xperia Z4 Tablet release date in the UK keeps getting pushed back, because it was meant to be released at the end of May, and that was recently pushed back to June 5, 2015. However, over the weekend, Sony updated its Store once again to say that Xperia Z4 Tablet deliveries are not expected to begin until June 17th.

You will notice that the word we used was expected, as this is the same word used by Sony, and so there is a possibility this date could slip once again. Seeing as though this is not the first time a shipping date has slipped, we have to wonder if any other issues could crop up? 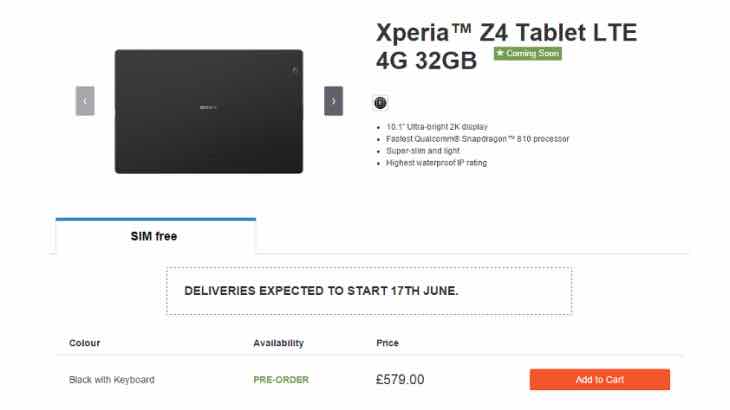 Sony has not explained the reason for letting the dates slip once again, but they no doubt have a good reason — just wish they shared it with their customers. It’s rather annoying that Sony waits until the last minute to announce the delay, which just proves people’s assumption that Sony is very bad at marketing.

However, you have waited this long, so another 10 days is not going to hurt, as the best things come to those that wait — if Sony sticks by this new date that is.

A note to Sony; if you do have to delay shipping again, at least send out a courtesy email to customers who have pre-ordered one.

Update: Well, it has happened yet again; looking on the Sony website we can see the Xperia Z4 Tablet has been delayed till June 29th – when will this end?