The Sony Xperia Z3 Tablet Compact has been on the market since September 2014 and in that time has been pitted against many other Android powered tablets, such as those developed by Huawei. What we did find strange is how many people decided to see how the Z3 Compact Tablet compared to that of the MediaPad T1 10 slate, seeing as though they have different display sizes, although we guess they were looking for a very good reason — maybe as they were comparable in price?

You may be wondering why we are bringing this up once again, seeing as though the MediaPad T1 10 is not the latest slate from Huawei. This is because the company has re-branded this as just the T1 10, and so this is not exactly the 2015 refresh we were hoping for. 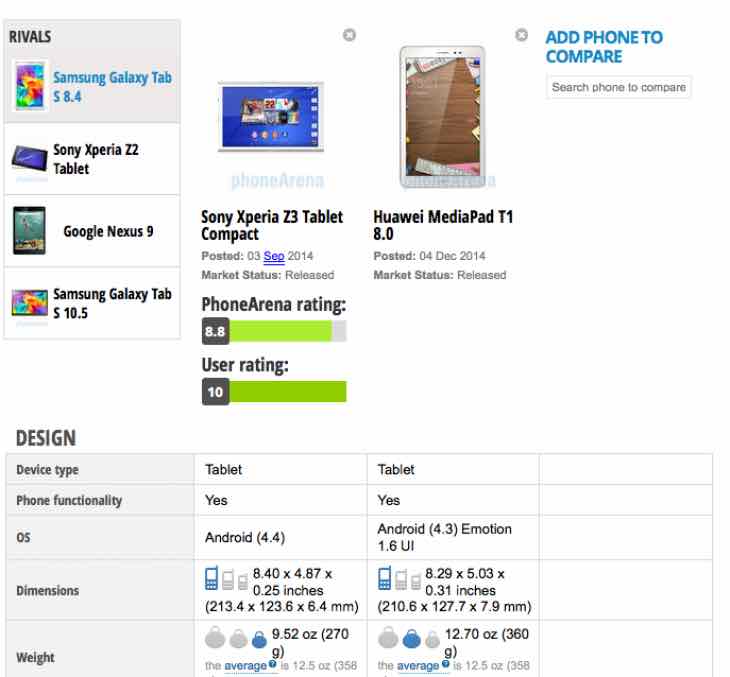 The Huawei T1 10 comes with a 9.6-inch IPS HD display and a 1.2GHz Cortex-A53 processor, and just 1GB of RAM, which is not that great. Then there is the 5-megapixel rear-facing camera, and a 2MP shooter up front. This re-branded tablet also comes with a 4,800 mAh battery to deliver 12 hours of video playback, 6.5 hours web browsing and 24 hours of standby time.

However, we still feel as though it would be better to compare the 8-inch model to the Z3 Tablet Compact, which you can see in a comparison breakdown here.

What we would love to see news of the Xperia Z4 Tablet Compact, although the full-size model has yet to start being delivered yet, as Sony has put its delivery back time and again.