We have had our hands on the BlackBerry Bold 9700 for over a year and to say that it feels dated is an understatement, however one thing which we thought was in its favor when compared to more advanced modern-day smartphones was its size, however we recently compared it to the newly released Sony Ericsson Xperia Play and we were pretty shocked with our findings.

If you check out the Bold 9700’s dimensions you will see that it measures in at 109mm x 60mm x 14.1mm and weighs just 122 grams, this is what we regard as a relatively small and light smartphone when you compare it to most of today’s offerings, however it is not a great deal smaller than the Xperia Play. This is despite the fact that this boasts slide-out PlayStation controls and a 4-inch touchscreen display. The official measurements are 119mm Ã— 62mm Ã— 16mm and weighs it 175 grams.

The comparison shows that despite its advanced internals and impressive features the Xperia Play is not as big and bulky as a lot of people may think, it is just 19mm longer, 2mm wider and 1.9mm thicker, we have to admit this did take us by surprise.

You only really get the impression that the Play is much larger than the Bold 9700 when you have the sliding controls showing, however it still fits nicely in the hand when you play the games and is smaller and lighter than the 3DS / PSP.

We have embedded some photos of the two devices side-by-side below, are you surprised at all? 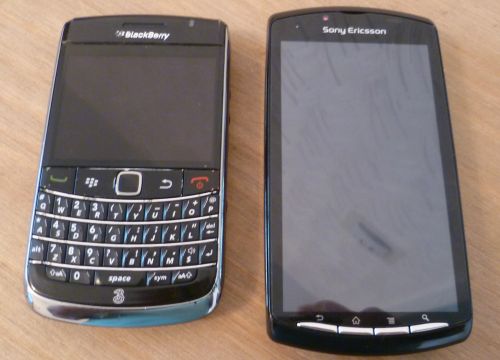 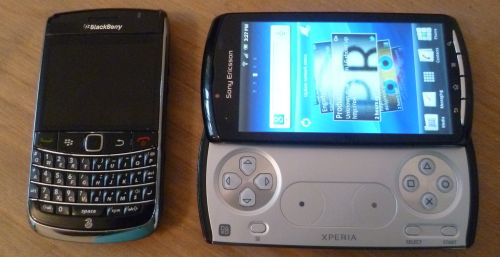