Yesterday Jamie Pert mentioned that Sony Ericsson would announce their new Xperia Arc smartphone, and he was right. We already knew some of the specs, but did not know much about the new Reality Display. Well Engadget thought that they would give us some insight so thought that they would see how it compares to the Retina Display (which is rumored to be used on the PlayStation Phone as well) on the Apple iPhone 4 and the screen on the Motorola Droid X.

All three displays are very close in quality, but the Reality Display will certainly come into its own when watching videos etc, as Sony Ericsson has incorporated Bravia TV technology. It is said that colors and details will be greatly enhanced, but we will just have to take their word for it at the moment. 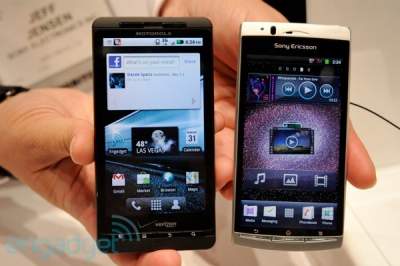 There are currently no videos offering a comparison between the three handsets, so you will just have to make do with three images instead. It does look as though the Retina Display on the iPhone 4 has the edge over Reality Display on the Sony Ericsson Xperia Arc, as you can see pixels when you zoom in close on texts.

We have done a bit of searching on YouTube, and are glad to say that we have found a video of this new handset in action. The video, which we have embedded for you below focuses on the new Reality Display. We were very surprised at how much the Mobile BRAVIA Engine technology helps to improve the video image quality, but this is something that we have come to expect from Sony.