I know that we never usually talk about new gun technology, but I had to mention the XM25 Rifle. The first thing that I thought when I heard about this game-changing gun on the news was the fact that we could be looking at a new weapon for the next Call of Duty Game — or maybe a DLC for any modern combat games currently on the market?

Guys like me and you are never interested in knowing what new weapon has been developed to help the fight overseas, but games such as CoD has made us more aware of what weapons are currently out there. So what makes this gun so special? 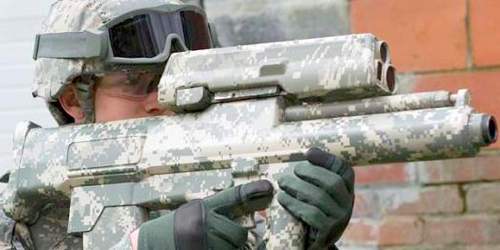 Michael Mathes from Yahoo News explains that this prototype has a smart grenade launcher that can be programmed thanks to new microchipped ammunition. This means that you can select your target to shoot, even if they are hiding behind a wall.

The XM25 Rifle is now in the hands of some units in Afghanistan, and insurgence had better hope that they do not come up against this formidable weapon, which looks like something Master Chef from Halo should be carrying. The weapon can shoot out a 25mm air-bursting shell up to 700 meters, which is further than any other rifle on the battlefield. This is one tough rifle.

Would you like to see the XM25 Rifle in the next Call of Duty title?