Xiaomi may have already cracked the India market with their popular Xiaomi Mi4 smartphone, but we have some information from those who are now looking forward to a new Xiaomi tablet release date for India.

While Xiaomi are not willing to disclose information yet on their new tablet specs, some rumors have started thanks to the tablet in question showing up in some recent benchmarks.

It is the results of these benchmarks that is the talking point though, as we now see a situation where Xiaomi’s new tablet in India may not include a camera – both front and rear. 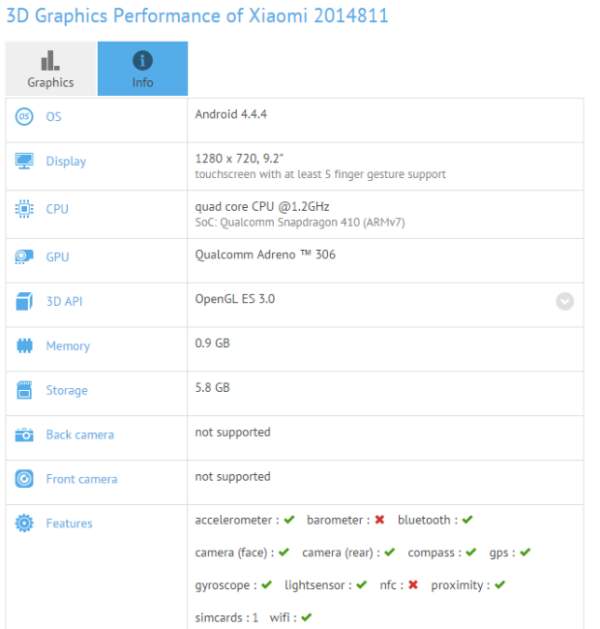 This would obviously be very surprising if true, considering that most tablets will feature a 0.3MP front camera as a bare minimum. The new Xiaomi tablet reportedly does not though, according to the results of a GFXBench test which you can see an image of above.

Be careful not to be confused with the Xiaomi Mi Pad 7.9 as this is an entirely different tablet which does come with a 8MP rear camera and a 5MP front camera.

This new tablet is thought to be coming with a 9.2-inch HD display, a 1.2 GHz Snapdragon 410 processor, 1GB of RAM and 8 GB of internal storage.

Looking at those specs, this could be Xiaomi’s answer to the iPad Mini 3 but obviously available at a much lower price if it doesn’t come with cameras and especially given the low storage capabilities.

What are your first impressions of Xiaomi’s budget tablet – would you be willing to get one if it is under $100 USD when it lands in India? We’ll keep you posted on this one.