The screenshot below is taken on Apple’s OX X 10.10 running Xcode 6 beta and reveals a glimpse of the iOS 8 simulator. The sim was run for a device named Resizable iPad on iOS 8, although there’s a number of different hardware profiles within the new beta version of this Mac software. 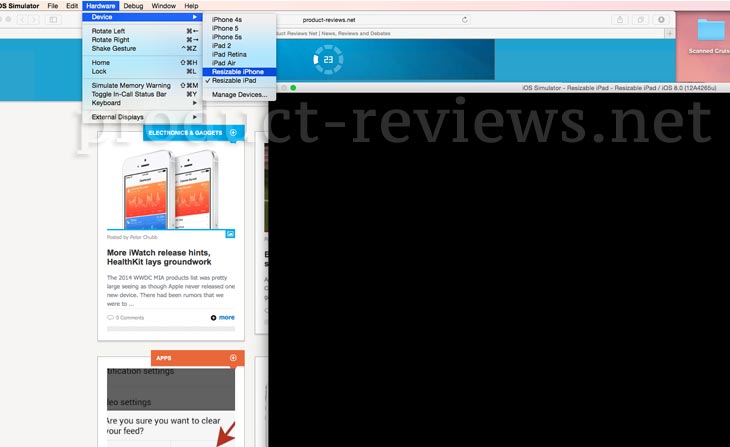 Other profiles under “device” within the iOS 8 simulator include iPhone 4S, 5, 5S, iPad 2, iPad Retina, and iPad Air. Two new options within the simulator for Xcode 6 beta are Resizable iPad and Resizable iPhone, which were not there in the previous version of Xcode to our knowledge.

You can see a closer look at these profiles in the screenshot below that clearly reveal the different devices on offer, and while we’ll leave Product Reviews readers to debate what a new resizable iPad and iPhone option really means, we cannot help but think about a 6th generation iPad and iPhone 6 or so-called Phablet option.

What do you think a Resizable iPad/iPhone option means for the iPhone 6 and iPad 6 screen size? We have heard about a 13-inch iPad for a number of weeks and also a Phablet sized iPhone 6, which could have a screen size of around 5.5-inches. We will find out the official specs in September just before an iOS 8 public release, although you can count on many more clues landing in the next 3 months.