We were wondering when Microsoft were going to introduce a new Xbox One price cut in the UK, after being very busy in the US by lowering the price of the console to $349.

Now, we’re pleased to see that Microsoft has now announced some lower prices for their console over in the UK – although with some limited time offers whilst stocks last and not a permanent deal.

For example, the Microsoft Store is now offering lower prices for Xbox One bundle packages than Amazon UK, which is some achievement as Amazon is usually the place to go to for the best price.

On Microsoft’s store, you can now pick up a white Xbox One console with Sunset Overdrive for just £279.99. That’s a saving of £70 and the package also comes with a £20 voucher to use on the Microsoft Store elsewhere. 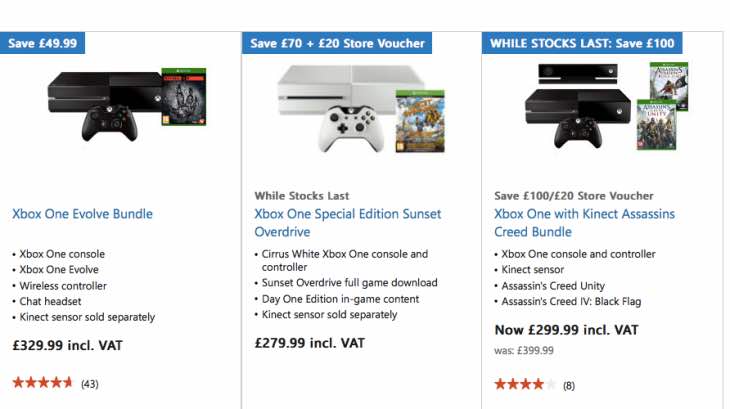 Amazon meanwhile sell the same package for £354.99. Microsoft are also offering the Assassin’s Creed Unity bundle with Kinect for £299.99 but unfortunately it’s already sold out – there’s still copies of the white bundle though, so act quick if you’re interested.

How does this compare to the best PS4 prices in the UK? On Amazon UK, you can pick up a console for £329 – but that’s just for the console without any games sadly.

The cheapest with a game such as GTA V is £380 which is still significantly more expensive than an Xbox One which comes with games in the package.

Are you willing to embrace Microsoft’s aggressive pricing strategy by buying a new console this week, or do you feel that Sony still offers the best package with PS4 despite the higher price?

Let us know if you have spotted any low prices on either console that we should know about.