Microsoft has just announced some massive news for in the gaming world and a total shock for some just checking up on the latest gaming news. Another Xbox One price cut in US is confirmed for Holiday 2014, bringing the price of the console down to $349.

Let’s just put that into perspective for the minute. The Xbox One at $349 is now cheaper than the PS4 after originally shipping at a premium $499 on the market – who saw that come after one year on sale?

The important thing that you need to know is that it isn’t a permanent offer. It’s a Holiday special which will start on November 2 and run through until January 3 2015. 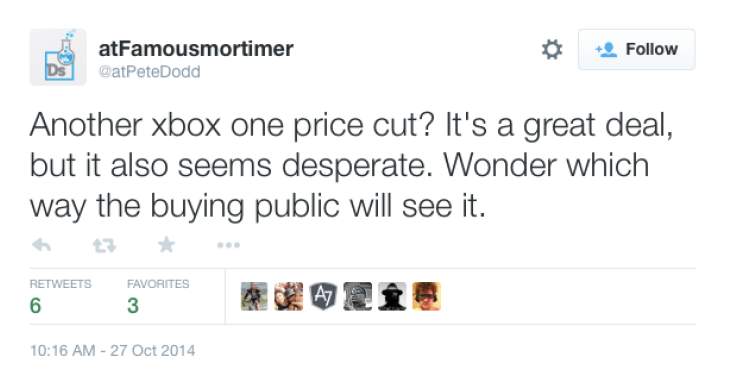 If you have been wanting to get an Xbox One for months but have yet to do so, now is your perfect opportunity. Just in case you need us to be clear, the $349 price does not come with a Kinect camera but it does also apply to any new Xbox One bundle which will now be $50 cheaper as well.

The big question is, how will Sony respond to this? We saw a Tweet posted hours ago by industry source Pete Dodd who thinks that it still has an element of ‘desperation’ to it from Microsoft.

There’s no denying that this is great for those that can now upgrade to Xbox One from Xbox 360 and it’s a perfect time for a price drop given the busy Holiday Season.

We are already seeing others back up Pete Dodd though by saying that this is Microsoft’s direct response to falling behind the sales wars against PS4 for consecutive months running.

What is your immediate reaction to the Xbox One price cut in US? Do you only see it as a smart move by Microsoft, without thinking of the negatives?