We know a lot of you have been expecting some nice new features for the Xbox One January 2016 update. However a recent Xbox One update on January 7 2016 did not bring any new features to the table, yet.

Some of you may have been given a notification to update to a new Xbox One update this week, but as always not everyone received the update at the first opportunity on January 7 since the rollout time can differ.

Major Nelson has given a heads-up though to say that the new Xbox One update was a minor one and didn’t add any new features this time. 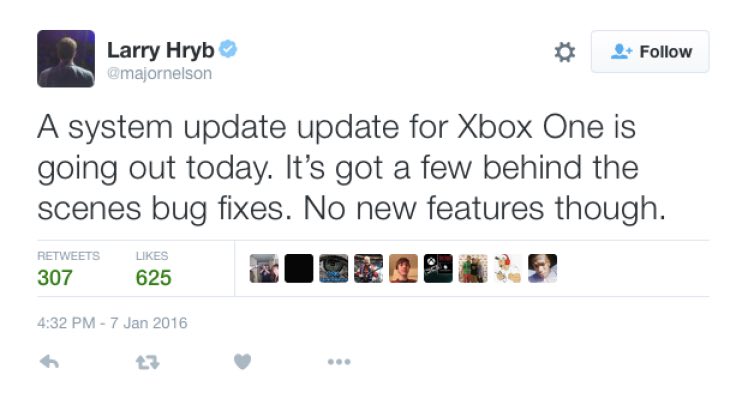 Instead there were bug fixes ‘behind the scenes’ that haven’t been specified – either security tweaks or something so minor it didn’t need to be made public.

As you can imagine, Xbox One owners are expecting new functionality soon, so hopefully there will be a proper update before the end of the month which will make users happy.

Another big request is new Xbox One games to play for backwards compatibility, so hopefully Microsoft will give us the good news this week.

Did you have to install an Xbox One update this week? Let us know what you are waiting to see in terms of new features for the next major Xbox One update.