We have some really exciting news to report now, as rumors are suggesting that Microsoft are finally planning to offer a ‘AAA’ game as part of the Xbox One Games with Gold March 2015 update.

It’s no secret that some Gold subscribers have been unhappy with the choice of games offered so far by Microsoft, despite the fact that in reality there has been some very enjoyable indie games – IDARB as the most recent example.

Now, Microsoft may be set to answer those calls. It’s been widely reported that Rayman Legends is the Xbox One game for Games with Gold in March 2015.

This is a fantastic game that received stunning reviews all around and is arguably one of the most beautiful platformers to release within the last few years from Ubisoft. 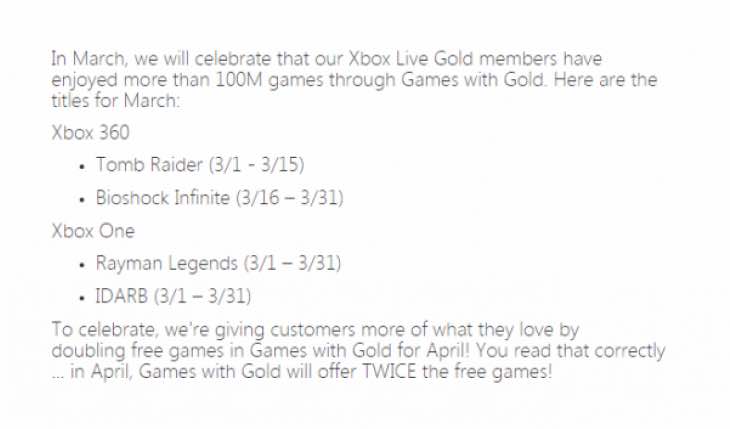 It’s not confirmed yet by Microsoft, but a screenshot captured from the Microsoft-run site Expertzone suggests that it is coming. On top of that, the details also suggest that IDARB will be offered for another month – not the first time Microsoft has kept games on for two months in a row.

For those that haven’t played Rayman Legends, this could be a real treat for you. It would definitely qualify in the ‘AAA’ bracket that is always paraded around on social media too, so it’s looking very promising.

Would you be really happy to receive Rayman Legends on Xbox One next month, if the rumors are true? As we wait for confirmation from Microsoft, give us your thoughts on this below.

Is this the moment when Microsoft fight back against PS Plus?