We could have another big game to add to the growing list of upcoming games that will be offered with a Xbox One backwards compatibility update in the future.

We already know that the likes of Black Ops 1 is on the way, along with the back catalogue of Bioshock and Halo Reach. Now, we have some fresh details which suggests that Brutal Legend may be added as well sooner rather than later.

Microsoft has maintained that any game can be added to the Xbox One backwards compatibility list, as long as the developer gives their permission. 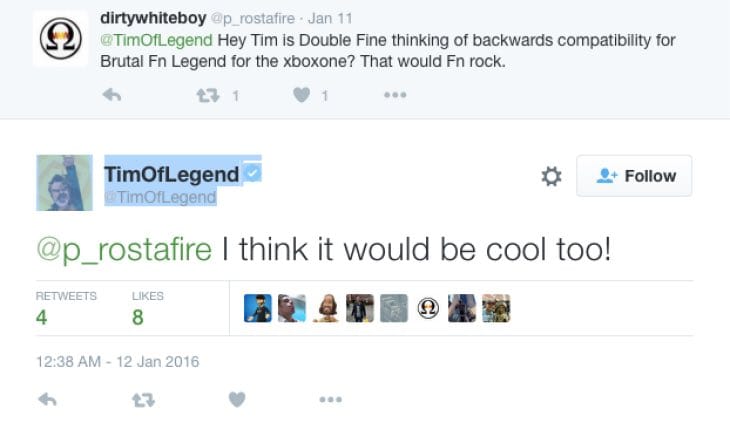 With this mind, Double Fine Productions founder Tim Schafer was recently asked on Twitter about Brutal Legends and above is what he said in reply.

If you remember, Brutal Legends was the fun action adventure title that starred Jack Black as the voice of main character Eddie Riggs. Ozzy Osbourne also had a part and the game was well received by fans after its initial release in 2009.

We would definitely love to see this back in the limelight on Xbox One so let us know if this is one game that you want to play via backwards compatibility.

If not Brutal Legend, what other games are top of your list? Microsoft should be announcing the January 2016 Xbox One backwards compatibility game list very soon so stay tuned!