We have some interesting news to bring you now from Microsoft, on the possibility of Xbox One backwards compatibility for original Xbox 1 discs happening in the future.

Microsoft has not ruled it out and it seems like the company are really in tune with giving fans what they want at the moment.

It’s no secret that Xbox One has a massive advantage over PS4 at the moment with backwards compatibility and this could get even greater if Microsoft’s team can find a way to make Xbox discs playable as well one day. 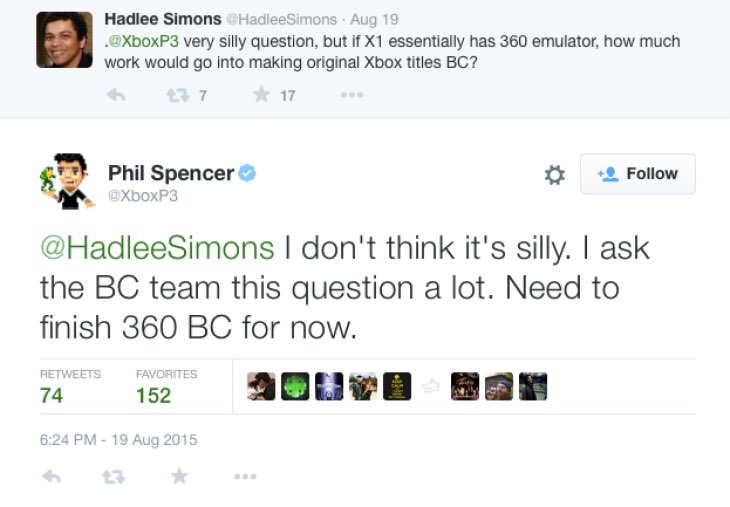 When replying to a fan on Twitter, Xbox boss Phil Spencer had this to say – revealing that he also asks the same question to his team which is pretty exciting to say the least.

It means that once backwards compatibility for Xbox 360 games is completely finished, Microsoft may well start up on getting older discs to work.

With classic games on Xbox such as Time Splitters 2, Baldur’s Gate, Shenmue 2, Ninja Gaiden and of course Halo 1 and Halo 2 there is going to be a lot of interest for this if it happens.

If they can pull it off, then it will only bring even more gamers over to Xbox One since there will be a lot of collectors out there with the original discs.

What are your thoughts on original Xbox discs for Xbox One backwards compatibility? What discs do you still have at home that you would love to revisit?