However, we are getting complaints from users who are telling us that their Xbox One Games with Gold install is stuck at 99% with Xbox One error code 0x87de07dc.

The two games in question are Max The Curse of Brotherhood and Halo: Spartan Assault. Both games are over 2GB in size, but this shouldn’t be a reason why the error is happening as Xbox One users would have installed games larger than this before.

@XboxSupport Getting error 0x87de07dc when trying to install Xbox One Games with Gold games at 99%.

We’re aware of the difficulties downloading Games with Gold titles on Xbox One and have a team working on it – http://t.co/99xfLNeme4 ^AD

Fortunately, Xbox Support are aware of the problem and are working on a fix as we speak. As far as we’re aware, this Xbox One 0x87de07dc error code is happening to US and UK consoles after the 99% stage – it could be all regions too. 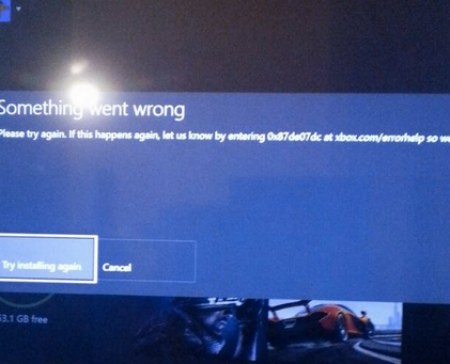 As we wait for an update from Xbox Support, let us know your Xbox status at the moment. Are you getting the same error code when trying to install Games with Gold on your Xbox One? We’ll keep you updated when we have more news.