If you are an Xbox 360 owner then you’ll know every year a major upgrade arrives for your software, and beta testing started for the Xbox Live fall update earlier in 2012 when users had to sign up via Microsoft Connect. The interest had been overwhelming and the ability to participate was stopped almost as soon as it started, so for those that didn’t manage to get into the early testing, the Xbox Live update for fall couldn’t come soon enough.

Today we’ve received an official email from Microsoft explaining important changes are on the way to Xbox Live, which is directly talking about the fall update but lacks the crucial release date we all want to know. We can pretty much guarantee the Xbox live software update will see a release date in October, which is thanks to several rumors pointing to that fact and this email being sent from Microsoft within the last 24 hours making users aware that it’s “coming soon“.

We’ve included the email in the image below just for those that don’t have an Xbox 360, or in case you’ve not received it for some reason. In a nutshell the email explains a few of the key features for the Xbox Live fall update for 2012. These include highlights for Voice Search, other Search refinements, and Recommendations and Pinning. 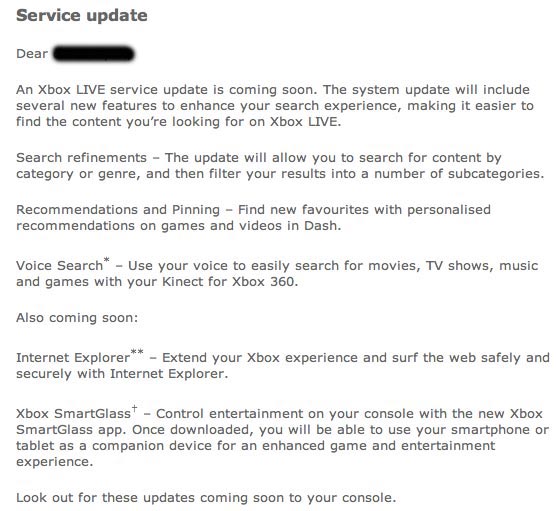 Microsoft also mention a few other new features marked as coming soon, which include Xbox SmartGlass and Internet Explorer. Once you download the SmartGlass app it will give Xbox 360 gamers extra entertainment abilities, and this means users using a compatible tablet and smartphone will gain enhanced features. The focus of this Xbox Live fall update will be on making it easier for you to find and access content, which is provided with a better search experience, SmartGlass, and other improvements.

What do you want to see improved with the major Xbox Live update for fall 2012? It is also worth pointing out that recent rumors state Microsoft are moving away from Points and towards real cash in your local currency, although this has been strongly denied by Microsoft. Considering the fall Xbox Live update is almost upon us, we’ll all know very soon.