We’re sad to see that it looks like Xbox Live may be under attack again in the build-up to Christmas. Many users are complaining that Xbox Live is down on December 18 and has been intermittently for several hours.

This has been confirmed by the ongoing Xbox Live status page which at the time of writing still shows a ‘limited’ warning with Xbox Live Core services as well as Purchase and Content usage having problems on both Xbox One and Xbox 360.

You can see a screenshot of this below, plus Microsoft’s description which admits that Xbox Live sign in on Xbox One and Xbox 360 could be down, as well as game invites not working as well. 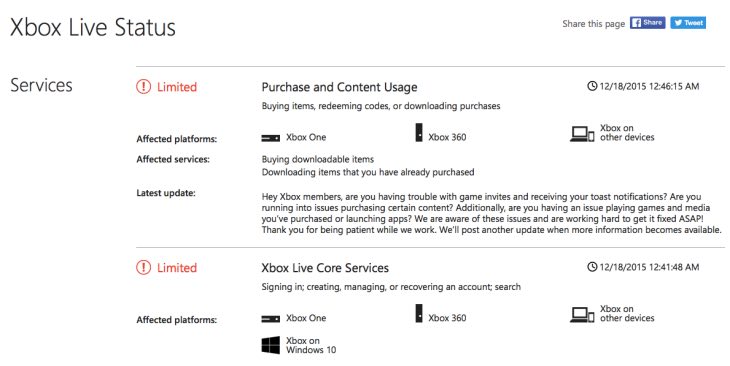 Meanwhile, it looks like one group has already claimed responsibility for Xbox Live being ‘hacked’. Last year it was ‘Lizardsquad’ and now it looks like ‘Phantom Squad’ are to blame.

You can see the Phantom Squad Twitter page here to take a look at what is being said – there’s also a threat that PSN could be next to go down as well.

What are your thoughts on this happening for the second year in a row, if true? Do you blame Microsoft for not increasing security on their servers given it happened last year?

Let us know if Xbox Live is down on Xbox One and Xbox 360 for you in your area right now.