There is a major outage right now with the Xbox Live sign in not working and it’s down globally. This fact has been confirmed by Microsoft themselves, which is thanks to the official status page confirming problems with the Xbox One console and users trying to sign-in to online services.

We have included a snapshot of the status page from just moments ago. As you can see, Microsoft explain that “signing into Xbox Live” isn’t working right now. So, if you are an Xbox Live member using the latest console then you will have issues trying to sign in today. 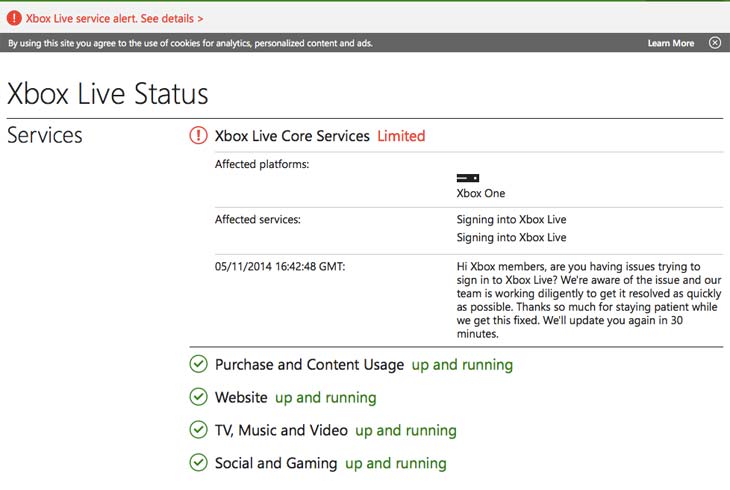 Microsoft said they are not only “aware” of these issues, but their team is currently working “diligently” to get everything back up again. The aim is to get the Xbox One sign in issues “resolved as quickly as possible”.

Are you having problems signing into Xbox Live right now and if so, is it will the Xbox One only or 360 as well? Also, leave your location with nearest city to see if this outage is for certain areas.

There’s updates being offered every “30 minutes” on the Xbox status page, so keep an eye on that or leave your current status below.

Update: It has been confirmed that Xbox Live is down everywhere on November 5th, 2014. We’ve had reports from Broadstairs to London in the UK, and from Canada to NYC in the US.