We have some disappointing news to bring to Xbox 360 owners in the US and UK now, as we can confirm that Microsoft will be introducing increased prices for their Xbox Live service, starting from November.

As confirmed over at Ars Technica by Major Nelson, the new prices will come into effect as of November 1st, and will also affect gamers in Mexico and Canada.

If you are used to paying an annual subscription to Xbox Live in the US, you’ll now have to pay an extra $10 for it, meaning that the total price will now rise to $50 per year. Gamers in the UK will have to pay an extra six pounds for the same package – which is obviously a pretty big blow.

How do you feel about this? I have to say that this is a pretty big surprise. I know that Microsoft are taking a big step into the world of motion gaming with Kinect, but to charge as much as $10 extra, is it pushing the boundaries a bit too far perhaps?

With Microsoft’s move in tact, there is now going to be an obvious backlash from Xbox 360 owners who will be furious with the new plans. Sony seem to be on the right lines with the option of Playstation Plus, while keeping online gaming free for those who aren’t interested.

We could understand if Microsoft were planning some major new features and services for the extra $10 per year, but that doesn’t look to be the case does it? Are you currently considering your options or are you still willing to pay the extra fees for Xbox Live?

Check out Major Nelson’s new price charts below, and let us know your thoughts on this. 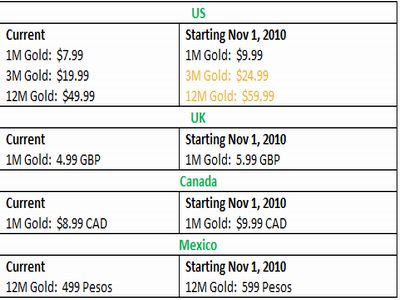