Microsoft is once again showing the benefits of Xbox Live Gold subscription, as they’ve just announced that the amazing Dragon Age Inquisition is going free to play for 6 days with a free trial.

This is the same game from EA and Bioware that was voted Game of the Year of course by both the Game Awards and the DICE 2015 Awards events.

As of right now, you can download the game for free and play until Monday March 10. After that, Microsoft has gone one step further by discounting the price of the full game – should you decide to buy it. 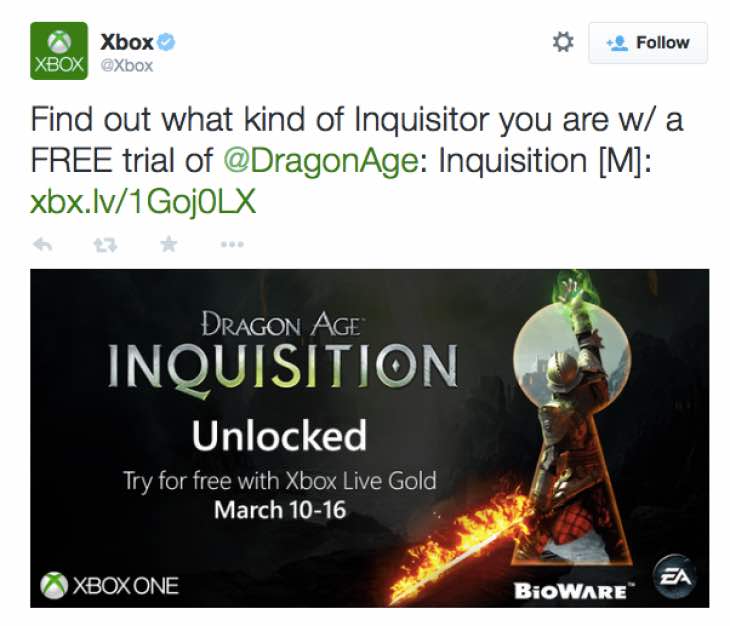 The discount is 40% via Deals with Gold and will be valid until March 16, so you have another 6 days to mull over the purchase. As far as we’re aware, progress made in the trial will carry over to the full game, so it’s an excellent opportunity to play one of the games of 2014.

At the same time, we couldn’t help but wonder why Sony are not doing similar trials like for PS Plus subscribers on PS4. It would be a fantastic idea in our opinion and definitely a way to increase sub numbers if Sony were to make it a monthly feature.

Right now, Microsoft is winning some praise for their AAA game trials with Gold and rightly so. Let us know if you plan to take advantage of the Dragon Age Inquisition trial and for PS4 owners, if you agree that Sony needs to bring this to PS4 too.