As far as we’re aware, this is an ongoing problem that has only just surfaced. Microsoft has confirmed that the Xbox Live server status is limited at the moment, which you can check yourself via the official Xbox Live status website here.

Unfortunately, there is no set ETA on when normal service will resume, but as you can see Microsoft has already assured gamers that the problems are due to a scheduled maintenance and that they’ll have everything fixed as soon as possible. 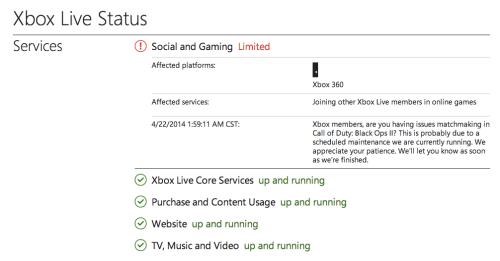 You can also see that this is specifically affecting Xbox 360 users, rather than Xbox One – although we have still seen some frustration from Xbox One users who are also having some Xbox Live matchmaking problems as well.

Hopefully this brief outage will not last long. Let us know if you have been having Xbox Live problems this evening/morning and where you are based.

Update: Microsoft has now updated the Xbox Live status by including the Xbox One on the list of affected platforms. We’ve also seen that GTA V matchmaking issues can be one example that is included as a result of the problems, joining COD Ghosts.