Just when you thought that the hacking group known as ‘LizardSquad’ were gone, we are hearing some rumours suggesting that they may still be planning further attacks.

In particular, we have been keeping an eye on Twitter and indeed YouTube, with a cat and mouse game now underway between LizardSquad Vs FinestSquad – the latter of which is apparently the group responsible for LizardSquad’s Twitter account being suspended.

Still with us? Now the latest on this somewhat interesting internet squabble is that LizardSquad are claiming that Xbox Live is going to be hacked on Christmas Day, aka December 25. 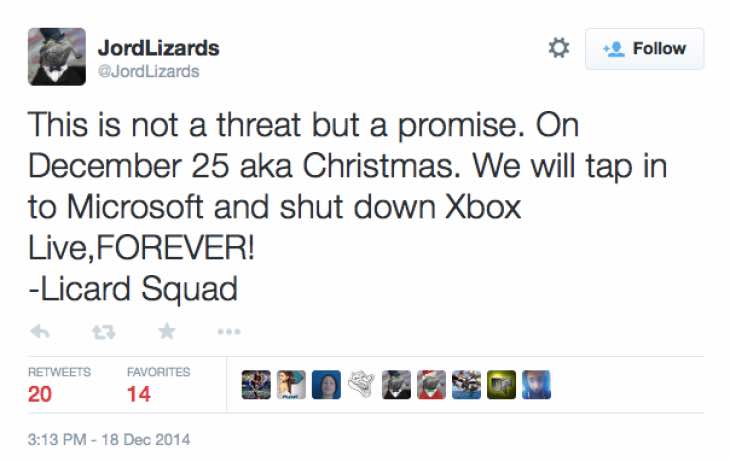 There are now numerous other Twitter handles from alleged members who are advertising this proposed attack, even going as far to say that Xbox Live will be down ‘forever’ on Christmas Day – which is obviously very hard to believe.

We speak on behalf of most gamers out there in saying that this problem has gone on far enough already. Obviously we don’t know if these claims are going to end up true, but we do know that there has been no DDOS attacks on either Xbox Live or PSN since the Lizardsquad group were suspended from Twitter indefinitely.

Now moving on to something more amusing, check out the live interview which was conducted recently by the DramaAlert YouTube channel. It actually features a live shown between the leaders of LizardSquad and FinestSquad respectively.

You may be surprised once you actually hear the hackers talking – we’ll let you draw your own conclusions on that.

Watch the video below, then tell us what you think about the new claims suggesting that Xbox Live is going down ‘forever’ starting from Christmas Day.