After the confirmation of April’s PS Plus offering, we can see that there are a lot of gamers who are very unhappy with Sony’s quality of games in recent months.

Many gamers know that Sony’ can’t deliver the best games every single month, but when Microsoft is almost managing this, it may be starting to show a clear divide on which service is currently better for your paid subscription.

In April, gamers will be getting Drawn to Death along with Lovers in a Dangerous Spacetime on PS4 as you can see from Sony’s Tweet below.

Drawn to Death and Lovers in a Dangerous Spacetime are your free PS Plus games for April! Details: https://t.co/CCPfRDbKat pic.twitter.com/2yKgS3dJdZ

Now take a look at some of immediate reaction that we saw below Sony’s Tweet when clicking through to see the comments. 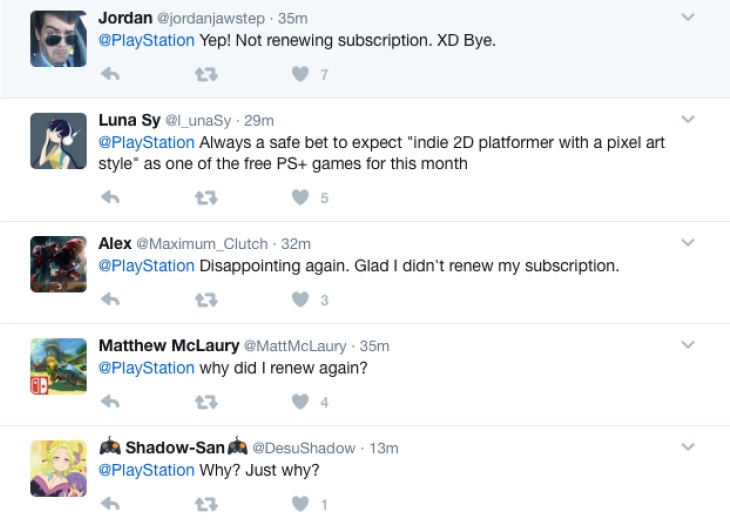 As you can see, there’s not a lot of love for Sony’s lineup for April and we have a feeling that the main reason for the anger is due to Microsoft’s unbelievable Games with Gold lineup for April.

Just take a look at what Gold subscribers will get in comparison:

What will you fight for?
Choose your cause with 4 new #GamesWithGold [M], coming this April to Xbox: https://t.co/cJQMGAxHl4 pic.twitter.com/K1TE6suXVa

Ryse has been a long running game in demand on Games with Gold and now Microsoft are delivering for the month in which they usually send out ‘Blockbusters’ which we told you about previously.

Not only that but you’ll get Walking Dead Season Two along with Darksiders and Assassin’s Creed Revelations on Xbox 360, playable on Xbox One via Backwards Compatibility.

Where is Knack which PS Plus subscribers have been begging for, for months? If you are unhappy with the quality of games lately leave your thoughts below and if you agree with some of the gamers that Microsoft is definitely winning the race at the moment.