It’s that time again, when Xbox One and Xbox 360 owners will be excited about what is next to come with the Xbox Games with Gold April 2016 free games.

So far, we haven’t had any April 2016 Games with Gold leaked information but we are expecting more details to drop later this week – they always do.

Remember that the last two games were leaked ahead of an official announcement, with Microsoft jumping the gun on showing the games on console in the Marketplace as being free.

Will lightning strike again to make it three times in row? We like getting early information on the games as it allows us to get hyped well in advance – although Microsoft has said that April will offer ‘Blockbusters’, so does that mean AAA games are confirmed? 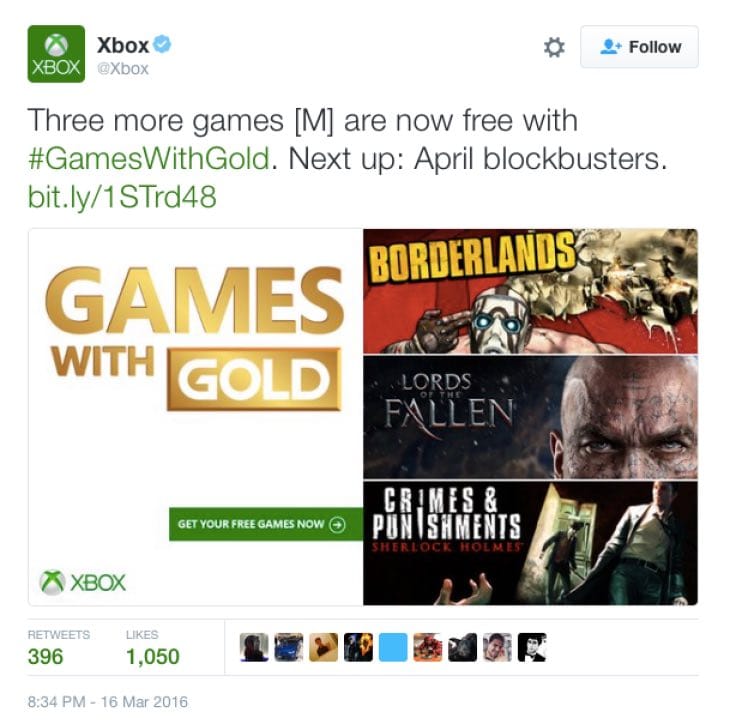 Then again, the surprise element is also good too so either way Xbox One and Xbox 360 owners are in for a treat. Remember with backwards compatibility it’s double the fun on Xbox One so let us know what kind of games you want to see for April.

Remember that the games leaving Xbox Games with Gold will be Sherlock Holmes Crimes and Punishments and Lords of the Fallen on Xbox One.

If you still haven’t downloaded Borderlands on Xbox 360, now is your last chance.

Everyone will agree that Microsoft has been offering better quality games than Sony’s PS Plus this year so far. With this in mind, how can they make April’s free games for Games with Gold even better?

We’ll update this once the leaks start coming in!