We are closing in on the highly anticipated Xbox Games with Gold January 2015 release date. Taking cue from Sony, Microsoft actually unveiled the games ahead of schedule and most Xbox One owners are now aware that they will be getting D4 Dark Dreams Don’t Die for free.

Before that though, we can confirm that the latest round of Xbox Deals with Gold for January 2015 is now live. Additionally though, there’s a surprise on top as Microsoft are also running a side promotion which they are calling the ‘Countdown to 2015’.

As a result, there’s further discounts in store and more importantly one specific game each day which is heavily discounted for 24 hours only. We have just seen Assassin’s Creed Unity offered with a 50% discount, but now we can reveal that the game replacing that for December 30 is Terraria on both Xbox One and Xbox 360. 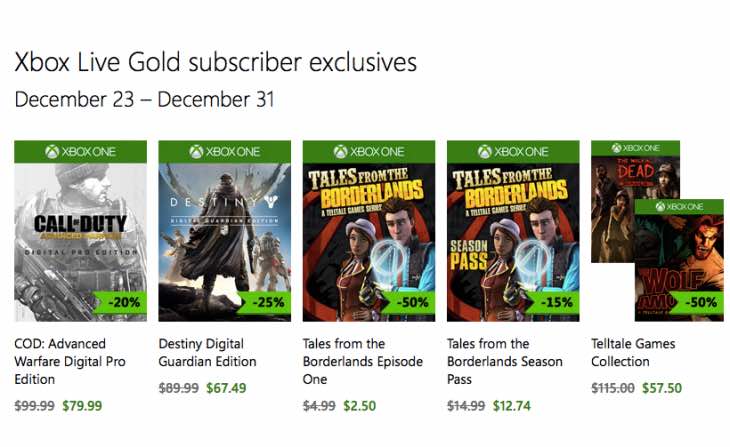 This soundbox adventure game is now available with a 40% discount on both consoles and could be a great way to kick off 2015. As for Deals with Gold, you should now see a range of discounts that are available on LEGO titles – including LEGO Batman 3 Beyond Gotham and LEGO Marvel Superheroes on Xbox One.

Finally, we’ve also spotted that Xbox Live Gold subscribers can pick up the Walking Dead Bundle on Xbox One for only $25, which is a special offer that is available until Wednesday December 31.

You can check out the full Xbox Deals with Gold games for January 2015 over at Major Nelson, while the other ‘Countdown to 2015’ bonus discounts including Terraria can be viewed here.

Are you tempted to splash out at the end of the year? Let us know what you think the best deal is from Microsoft at the moment.