Forget about all of the negative always-on rumors that is surrounding the next-gen Xbox console at the moment. Do you remember the promising projector-based technology called Xbox IllumiRoom that Microsoft debuted at CES 2013 in January? If you do, you’ll be interested to know that it now looks like this technology will be part of the main Xbox ‘720’ features at launch.

For those that missed it at CES, IllumiRoom is a very promising concept by Microsoft which uses a projector to insert visualizations into your gameplay experience, that extend out of the reach of your TV, onto the walls for a much more immersive gameplay session.

IllumiRoom can take a FPS shooter game and effectively extend the person’s field of play, whilst also using motion sensors to create additional lighting effects based on which type of game you are playing. It looked fantastic when we saw the video at CES and now it looks like Microsoft are planning to make it one of the core features of the next Xbox. 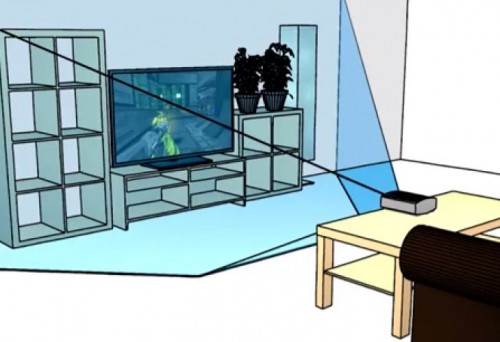 Microsoft has now said that ‘IllumiRooom envisions a next-generation gaming console with a projector that sits on your coffee table and surrounds your television with projected light”. It means that the next Xbox could come with this mini IllumiRoom projector, along with a separate Kinect camera to combine both at the same time.

The video you see above also teases that existing games can also be altered to support IllumiRoom, as the very brief tease of Portal from Valve suggests. We hear how many critics are still calling this a gimmick, but we think it definitely beats the likes of Kinect hands down.

All eyes are now on Microsoft to see whether IllumiRoom makes an appearance at E3 2013 – we think it will. Watch the new clip above and let us know if you are excited about this new projection feature or not.