The next Xbox, or Xbox ‘720’ as it’s commonly referred to, is almost certain to be unveiled in the coming months and then released to the public before the end of the year. Will the company pull a few surprises and give the next-generation Xbox a completely new title that hasn’t been discussed yet, or will they stick to popular belief and just announce it as the Xbox 720 to avoid confusion?

Project Natal transforming into Kinect certainly took Xbox 360 gamers by surprise, but how would you feel if the entire Xbox logo was changed for the shift over to next-gen as well? We have some fun images to show you now, giving you an idea of what could be possible if Microsoft ever decide to revamp the Xbox brand completely.

It wouldn’t be a bad idea, especially if the change is anything like the modern theme that we see here. Created by Cory Schmitz, the redesigned Xbox logo replaces the written text by simply using an X and a box design. It’s a bit strange at first glance, naturally, but after seeing the logo used in a variety of current products – it actually looks pretty slick.

It may be just a bit too modern to convince you that it’s better than the current logo design, but it is definitely a grower and a nice look at what could be possible in the future if Microsoft also decide that a change is needed. Aside from an Xbox logo change, the same design has also been used to give the Xbox Live logo a makeover as well.

Take a look at how the two combine on a concept box art for the upcoming Metal Gear Solid: Ground Zeroes game – are you a fan of this look or do you prefer the current style? We can’t wait for next-gen consoles to arrive and we wouldn’t mind seeing some brand new design overhauls as well. 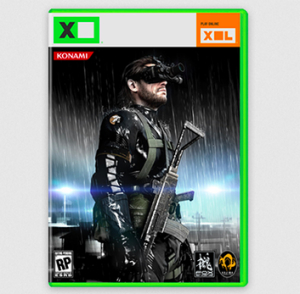