It is fair to assume that the Xbox 720 is coming sooner rather than later. Whether this is just an acknowledgement from Microsoft or an official unveiling it is still coming regardless. We’vel seen a lot of release rumors over the last month, but nothing related to a possible design for the new system.

Until now that is. We have just stumbled across a pretty fantastic design concept for the Microsoft’s next console, and while there appears to be plenty of PlayStation 4 concept designs on the internet, we’re pleased to say that this new one for the Xbox 720 helps to shift the balance a bit.

This design we have to show you now has been created by Joseph Dumary and has been given an image gallery which you can check out yourself over at Yanko Design. From the pictures we’ve seen we can say that there are definite similarities to the current black Xbox 360 model, but this one obviously has that ‘2012 makeover’ element to it.

For starters, this design doesn’t appear to show a disc tray – this is because this particular Xbox 720 design features an integrated Kinect system, complete with motion cameras and voice recognition support. As for the lack of disc tray, the system will instead use a Kinect scanner to read game cards which will then transfer directly to the console ready to either download or stream it.

This concept model comes with a mammoth 2TB hard drive, an 8-core GPU, 3D support, GPS, a webcam and also a built-in TV tuner for digital television viewing. As nice as this model is, it’s a shame that we probably won’t see such a device for at least another 20 years, as a 1TB system with all these hardware goodies inside will surely cost gamers an extortionate fee.

Check out all of the pictures over at Yanko Design and let us know what you think of it. In your opinion, how far off do you think we are from seeing a 1TB storage system and consoles which competely rely on digital distribution – ie, no disc format. 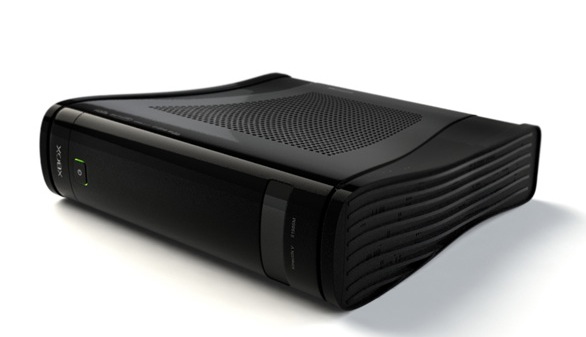