As reported by the official Xbox Live status page and on our dedicated outages page, it looks like Xbox 360 users might be experiencing service disruption today. While it’s unclear if Xbox 360 owners are seeing Xbox Live totally down today, we do know some people cannot join other Xbox Live members in online games.

Microsoft’s official statement landed on their Xbox Live status page at 6:39AM GMT on May 21, 2015. The exact reasons for server problems hasn’t been given, but the service alert mentions “Social and Gaming” is limited on just the Xbox 360 platform right now.

This is why some people have been complaining about multiplayer issues with Call of Duty: Advanced Warfare and Grand Theft Auto V, although not all players are affected considering our review machine was able to connect to online games just moments ago. 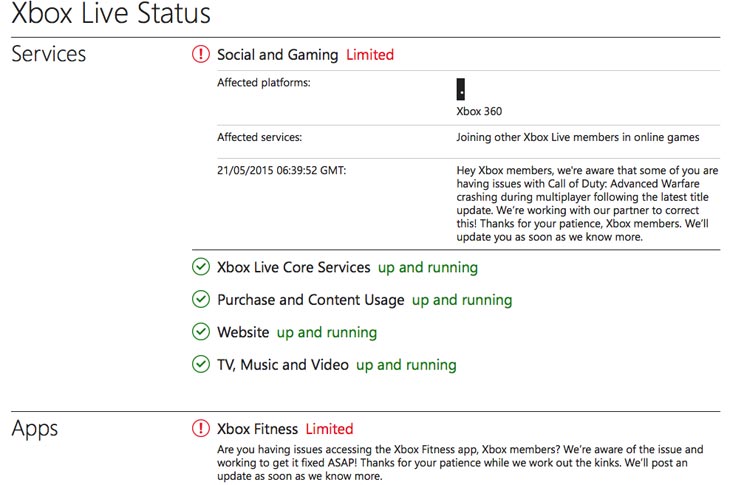 You can see a screenshot above, which shows the time and reason given for problems today. As you can see, there’s apparently problems with the Xbox Fitness app as well and this might be impacting Xbox One owners if they use this application. You can get the latest updates directly at support.xbox.com, or leave your own status update in the comments and on our Xbox Live down page.

Is Xbox Live still having problems since the official statement? If so, leave a comment.