We have more Kinect hacks to show you now, and this one is arguably the best yet, as a clever team has managed to create an even more responsive virtual piano program using the Xbox 360 Kinect sensor.

You may have already seen an early version of the OpenKinect piano project, but a new video has just been released, and it’s pretty impressive to say the least.

For starters, the response time for hitting the virtual notes are much more responsive, and we now see the virtual piano being demonstrated in a variety of ways, such as on a standard desk, on the floor, and also a preview of how the program can cater two users at the same time.

Towards the end of the video, you’ll instantly recognise the tune from that Tom Hanks movie. We can’t wait to see this program implemented further. Imagine a game developer adding some real support to this idea, the possibilities are endless. Check out the video below and let us know your thoughts on this. 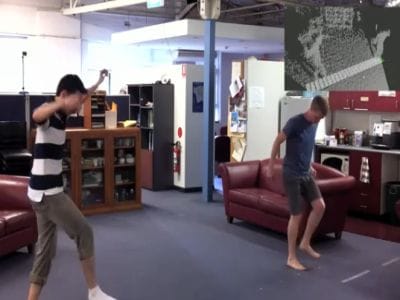 What other ideas do you have for the Kinect sensor?