When Microsoft first announced that they were to release a motion-sensing controller we all thought that they were dreaming. However, Kinect for the Xbox 360 has not been out that long and has already sold over 2.5 million units in just over a month.

We have already had reports that some retailers were running low on stock — sounds just like what happened to the Nintendo Wii when that was first launched. The thing that I found amazing with how popular the Kinect motion-tracking camera is how there are only a limited selection of games available. 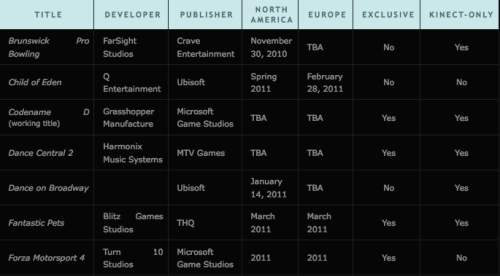 Currently Xbox 360 gamers do not have many Kinect games to choose from, but that is all set to change in 2011; according to an article on Kickarss there are 21 new titles due for release next year. So if you thought that sales of the Kinect were good now, just wait until you have more choice in games.

Looking down the list a few jumped out at me, while others did not even register. The ones that I look forward too the most are ‘Grand Slam Tennis 11’, ‘Kinect Star Wars’, and ‘UFC Trainer’. There is only one issue, I do not have an Xbox 360 — I will just have to persuade my cousin to buy them.

What Xbox 360 Kinect game are you looking forward to the most in 2011?