If you consider yourself to be a fan of superhero movies, there’s a very good chance that most of you have already watched the recently released trailer for the next big movie in the X-Men franchise.

The movie will be called X-Men First Class and it will explain the origins of both Professor Xavier and Magneto and how they became the characters which we all know and love.

As expected, there will also be a video game release to tie-in with the movie, and it’s no surprise to once again see Activision at the helm. We don’t know who will be developing the game yet, but we’re hoping that the game doesn’t turn out like all of the other movie game tie-ins, do we really have to remind you about Iron Man?

We’re optimistic that X-Men First Class will be a solid game for the Xbox 360 and PS3 though, as the developers only need to take a look at Batman: Arkham Asylum for ideas on how a superhero game should turn out to be. Judging by the trailer which you can see below, it looks like a lot of your favorite X-Men characters will be featured in the game, such as Nightcrawler, Mystique and Cyclops. 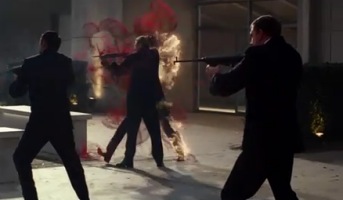 We would’t mind at all, if X-Men First Class went down the arcade path. By this we’re talking about an old-school co-op fighter with support for four players on screen at once – what do you think about this?

There are tons of ideas in which Activision can take First Class, we just hope they don’t go down the Iron Man route again – no-one wants to see that. Let us know what ideas you have for a successful X-Men game. Expect this to release during the Summer on multiplatform.