It’s hard to imagine another mobile game that could reach the success seen with Hearthstone, although the lack of an iPhone and Android app mixed with the fact that WWE has a massive following could be enough. The new WWE Supercard app for iOS and Android is set for major success, and the new card battle game has had a few hundred thousand downloads within a matter of days.

The screenshot below reveals some of the superstars you get to play that include Hulk Hogan, Daniel Bryan, John Cena, and many more in this massive WWE roster containing over 400 collectible cards. You’ll be able to collect Managers, Legends, and Superstars within the WWE Supercard app on both iPhone and Android. 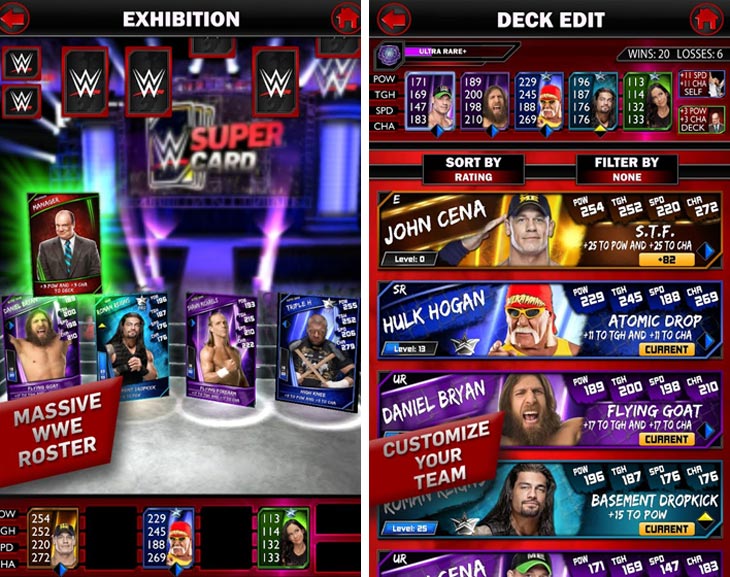 If you love playing card battle games and have grown tired of waiting for Hearthstone to release on iPhone or Android, then this is certainly worth a try and even more so if you remotely like World Wrestling Entertainment.

Features of the game include the ability to take a team of 5 online and play against others, and of course if you win you’ll earn new cards for your own personal roster. You will find a lot of customization to combine or train cards to upgrade them to a new level, or unlock their full potential over time.

Have you been waiting for Hearthstone to release on iOS or Android and if so, have you started playing WWE Supercard instead? There’s also a King Of The Ring tournament that will really test your deck, although we recommend you get a bit of game time before entering this tournament, as it could be costly.

The game will expand with future updates to add more cards with roster updates. You can download the WWE Supercard app through the Apple App Store on your iDevice, or by going to Google play for Android users. You can see an in-depth gameplay video below.