WWE 2K15 will be released for the PS4 and Xbox One tomorrow, several weeks after the PS3 and Xbox 360 versions launched, and having already looked at the rosters for the new generation consoles and how it compares to the previous models we thought you might wish to know how much you will have to pay in the UK.

We know the WWE 2K15 price for the PlayStation 4 and the Xbox One will vary from different UK retailers, and so we thought we would save you the hassle and explain the cost of this new title from Asda, Tesco and GAME, which are three of the most popular stores to purchase games from. 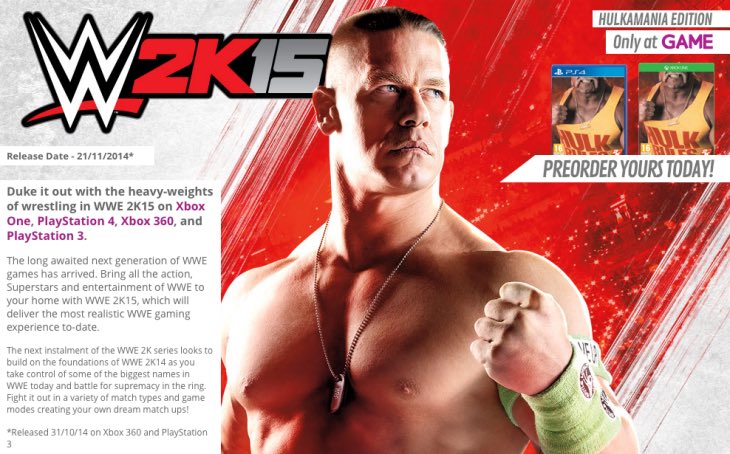 Let’s start with GAME first seeing as though we have a nice image of them promoting the game above. There are two versions available; the standard will cost £44.99 each, which did come with a pre-order bonus online, but that has since ended. There is also WWE 2K15 Hulkamania Edition, which is a GAME UK exclusive and comes at a price of £74.99. This store seems to be having some sock issues, which shows just how popular this title is.

Asda is a little cheaper at just £44 for each new-gen console version. However, the best deal would have to be Tesco, as you will pay just £42 in store, as well as getting even more money off with Clubcard Boost.

There are other places in the UK to buy this game, and if you have managed to find it cheaper then please let our readers know in the comments section below.