We have some excellent news for those of you still enjoying WWE 2K14. New DLC is now available, finally offering players the chance to choose Fandango from the roster. Before you ask, it also includes his fantastic entrance music that recently went viral on social media.

Ever since the game launched, fans were a bit disappointed to see that Fandango wasn’t a part of the main WWE 2K14 roster, despite his huge popularity on WWE TV. However, the wait is now over – Fandango is free if you have a WWE 2K14 season pass, or if not he comes as part of an $8 character pack that also includes the likes of Big E Langston.

You’ll also be pleased to know that Fandango also comes with his official finisher in the game, which also has a name that you may not be familiar with. WWE are calling it Beauty in Motion and you’ll be able to see the reverse STO followed by the top rope leg rope in the clip below. 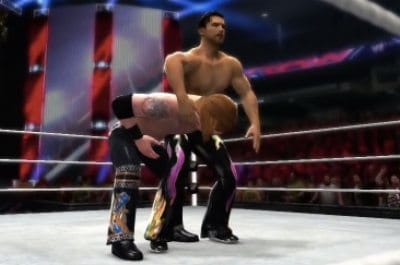 Does Fandango have the best entrance in the WWE right now? It’s a shame that his entrance on WWE 2K14 doesn’t come with the crowd singing the theme as well – that would have been awesome.