The wait is finally over for WWE fans. After months of THQ teasing gradual roster reveals, we’re happy to report that the developer has now unleashed a new trailer for WWE 13 showing the entire character roster, including the full set of Attitude Era wrestlers as well.

The list is very impressive as well, although there are one or two notable omissions which we’re guessing will come later via DLC. Let’s get the one of the main excitements out of the way – the main Attitude Era DX roster will all be in WWE 13 and it looks like their reunion at RAW 1000 served as a double purpose.

With the exception of Chyna – Triple H, Shawn Michaels, Xpac, Road Dogg and Billy Gunn will all be playable in the game in their DX attire, meaning that you can relive the glory days from your sofa as a stark contrast to the state of WWE programming right now. Other surprise additions include the APA Farooq and Bradshaw, JBL on his own in his cowboy attire, a Hunter Hearst Helmsley iteration of Triple H and the most dangerous man in the world, Ken Shamrock.

WWF veterans will also be pleased to see the likes of British Bulldog and Hawk and Animal in the game, as well as humorous additions such as The Godfather and Shane ‘o-Mac’ Mcmahon. Surprisingly, the likes of Val Venis, Steve Blackman, The Hardys and new talent Ryback have all been left out of the game, but there still happens to be a slot available for Vince Mcmahon in his Attitude Era outfit during the Austin storyline.

Take a look at the full roster at THQ’s website here and check out a cool reveal via video in the trailer below. The clip also includes footage from Undertaker shoving Mankind from the top of Hell in a Cell as we previously told you about here. Are you happy with the full roster, or are you a bit disappointed that certain individuals didn’t make it? 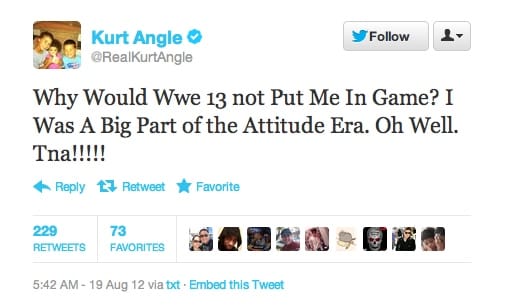 Kurt Angle has also expressed his disappointment on not being included – would you have liked to see him in the game, despite him wrestling for TNA now?