Game developers and publishers continue to use social marketing strategies to build hype for games and also give gamers the feeling that they are being listened to – recently a Facebook campaign asked whether games wanted to see John Cena or The Rock as the cover star of the collector’s edition of WWE ’12 – well the votes have been counted and we can confirm that The Rock won the honor.

Currently we do not know exactly what the People’s Edition will consist of, however we are told that people who buy this particular editions will get lots of “The Rock” themed exclusive premium content. THQ has revealed that they will reveal more information on the matter soon – it may be worth “Liking” the WWE Games Facebook Page for all of the latest information. 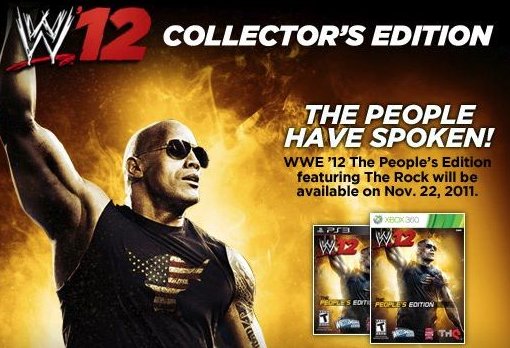 The social marketing campaign is quite a clever one as John Cena and The Rock will battle it out at WrestleMania XXVIII on April 1st next year – the results of the vote shows us that there is still a big fan base for The Rock who was a fan favorite in the late 90s. This proves that there will be plenty of ‘electricity’ when the two wrestlers main event the pay-per-view.

Currently we do not know how much the People’s Edition will cost, all we know is that more information should be coming soon – will you buy the WWE ’12 People’s Edition when November 22 arrives? Also what exclusive content would you like to see?(Note: The UK release will take place on November 25th)