After months, even years of waiting, World of Warcraft: Cataclysm has finally been released. Along with all the new zones, dungeons, raids, and quests comes new rewards and gear. Some of which can be obtained by grinding reputation with select factions. Here are some of the rewards you can get.

There are eight new reputations, four of which are Alliance or Horde only. Amongst the new rewards, we will get our new helm and shoulder enchants. Some of which are BOA (Bind on Account) and some that are BOP (Bind of Pickup). We also have new mounts to grind for, new tabards (most of which can be obtained at Friendly, and can be used to grind reputation in dungeons) and new epics.

Guardians of Hyjal offer a tabard at friendly, to which can be obtained by questing in the 78+ zone for around 20 minutes. Notable rewards consist of a spellcaster helm enchant and epic items at exalted. View entire list of rewards.

Earthen Ring are located in the new Cataclysm zone Vashj’ir, which has been split in to several different zones. It is also home to the Subdued Abyssal Seahorse, which is an underwater mount. The entire list can be found here, but ones you want to look out for are the new tanking helm enchant, and some great spellcasting epics.

Ramkahen are a bunch of cat people in Uldum who descent from the Tol’vir, the new 83-84 questing area. If you are a physical dps spec, then this is the faction to rep with by doing dungeons and quests with the tabard as you get your hands on a physical DPS head enchant. Oh yea, and you can also grind out those camel mounts too! See the full list. 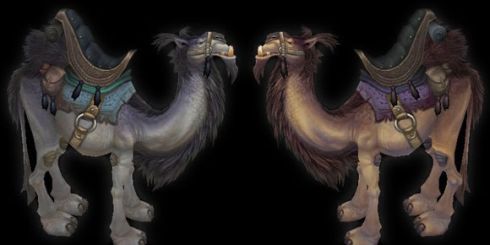 Therazane is the new faction in Deepholm. You start at hated, but as you quest through you gain up to honored and get the rest from doing daily quests and dungeon runs, again by wearing the tabard. Therazane is going to play a major part in 85 questing as it is the new home for shoulder enchants for all classes and specs, much like Sons of Hodir in Wrath of the Lich King. Full list here.

Dragonmaw Clan (Horde Only) have realigned with the Horde after once being servants of Illidan in The Burning Crusade. You can find them in the Twilight Highlands, where they will provide you with epics and a strength-orientated helm enchant. A tabard is also available. Here is the list of available items.

Wildhammer (Alliance) are also residing in the Twilight Highlands, and are at war with the Horde equivalent — Dragonmaw Clan. They are a clan of dwarves who also provide a strength-orientated helm enchant and a tabard. Full list.

Baradin’s Wardens (Alliance) and Hellscream’s Reach (Horde). Neither of these provide you with a tabard, so all rep will have to come from questing dailies and participating in PVP battles. Much like Winterspring of Wrath, players battle for control of Tol Barad, with the winners holding the area for a specific amount of time. Rewards to note of here include two mounts — Reins of the Spectral Steed and Reins of the Drake of the West Wind. Other important trinkets can also be obtained. Check out the full list here.

Which reputation are you going to grind first then?