Motorola has only just released the Motorola Droid RAZR on Verizon recently, but now we are hearing that the model may be joined by a lovely new white version, if recent image leaks are to be confirmed. The addition of a white color smartphone is still as popular as ever, and consumers will be very interested that the Droid RAZR may be next to benefit from a white makeover.

We have previously heard rumors about a White Galaxy Nexus and the Red Droid Incredible 2 of course, with the latter going on sale during the weekend’s holiday sales, but according to one image obtained by Droid-Life, the Droid RAZR could be releasing in white as well.

The image appears to show an internal Verizon listing for a white version of the RAZR, as well as something known as the ‘Droid X 2GB’ – could Verizon be planning to release an updated version of one of their most popular handsets with more memory? – Consumers wouldn’t certainly say no to 2GB of RAM if that is the case.

Back to the white RAZR though, and thanks to user TheShuke, a render has also been created to give us an idea of what a white Droid RAZR may look like if it is officially confirmed. Check it out below, along with a render showing the original RAZR in a more darker theme. 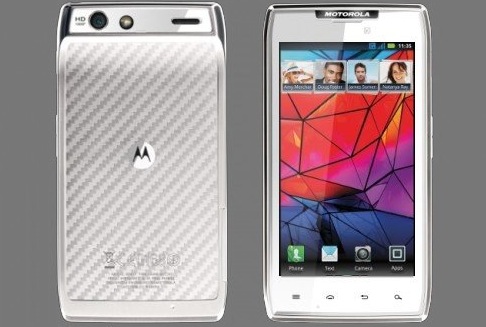 What do you think? It looks pretty nice from where we are standing and we’re sure that some of you who opt for a white version ahead of the normal color. Obviously it may be more prone to attracting dirt and visible scatches, but in the style stakes the white one surely comes out on top.

If you haven’t bought the Droid RAZR yet but were planning to get one in the future, would you pick up this white model ahead of the normal color or not? We’ll inform you when we get more details.