For those of you who have always wanted to know who the world’s richest people are, then one of the easiest ways to do this is by using one of the many apps on iTunes. One such app is AllRich, which comes in a free version for the iPhone or a HD version of the iPad at a cost of $0.99.

You will find detailed information on all those more fortunate than you, such as Bill Gates and Warren Buffett. Once you click on a certain person you will then see more details, such as when and where they were born, and their occupation and net worth.

Another app that we have found is called FilthyRich and costs just $1.99 — ok more expensive than the other one. This app works on the iPhone and the iPod Touch and gives you details on the 50th richest people in the world — that’s if you want to know just how much they are better off than you? 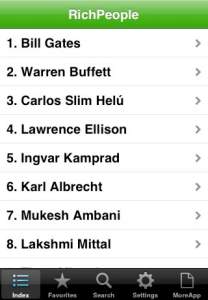 However, you have to remember that some of these people had to earn it the hard way, such as Bill Gates. He started things off from the ground up, unlike some of the others who had things handed to them. If you had the kind of money they do, what would you spend it on?