Social networks have seen users embracing the World Series of Poker 2011 event this week, and today is “Day 5”. The official WSOP Facebook channel (over 226,000 followers) has just posted details on today’s schedule and live coverage, which includes tournament updates from the main event. The comments are following in fast on Facebook for this years event, but we find Twitter to be the best source of discussion.

Followers of the Poker event know that it’s held every year in Las Vegas, and this has been the case since 2005. World Series of Poker is said to have origins dating back to 1970, when seven of the best United States poker players met for a single tournament at the Horseshoe Casino, which was arranged by Benny Binion.

One of the best iPhone apps and Android apps for Poker is said to be the official World Series of Poker app, which gives players their fix no matter where they are. WSOP Hold’em Legend will let the user connect with other players from around the world, using peer-to-peer connectivity and play in seven casinos and 25 events. What we liked the most about this app was the included videos, which give an introduction to Caesars Entertainment casinos. The AI is pretty smart, and getting leaderboard integration gives recognition to those that reach the top. It’s worth noting that the leaderboard is shown on WSOP.com. 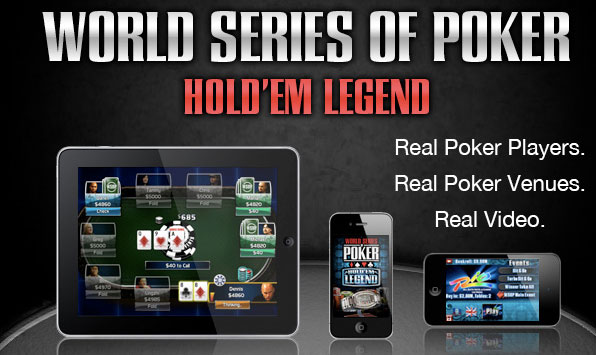 Main features on the iPhone version include the ability to pay for a second chance, which gives you the opportunity to buy your way back in when playing a career tournament. When you do something special, you’ll earn unique achievements (there are 20 to collect). Replaying hands is a pretty cool feature that lets you recall your favorite hands, and the Game Center enhances the game with achievements, multiplayer and leaderboards, although you’ll want to play as a single player to earn the trophies for every event in the Legend Career.

You can watch the 2011 live World Series of Poker championship online via this link, which shows a live video stream. Have you been watching this year’s event, and if so what do you think so far?