Compete as a professional and play for your country with World Cup Table Tennis the new game for 2011 on the iPhone, available for the iPad and iPod Touch.

World Cup Table Tennis by Skyworks is the addictive classic game in 3D and great new addition to world of sports applications. This game will test your reactions as you start off playing against the lower ranked of 20 countries and build up to compete with the major contenders. Cover the corner areas as they are easily missed, if you lose you will not only let yourself down but your whole country.

Four modes are available to test your rapid response; these include Arcade, Tournament, Career and Multiplayer or Head to Head. Arcade mode is a classic version with bonus features, Tournament puts you up for the chance to win the Gold Cup, and Career has you compete to progress from a starter level. Head-to-Head will give you the opportunity to challenge other players in real time.

Unlock eight different paddles to gain a better handling with spin and a power skill, each paddle contains different physics so you can find your ideal style of play. Have your own music and boast your scores on Facebook and leader boards. Gain achievements in Game Center and practice your skills in Arcade mode playing to a wall with targets. 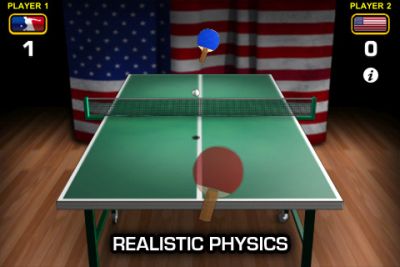 Test your reactions competing against others with World Cup Table Tennis the classic addictive 3D game. For more information, visit the App Store.