The FIFA World Cup 2014 start time is just hours away, with Brazil Vs Croatia live in a matter of hours as the main highlight for Thursday. We have been providing you with various World Cup 2014 schedules to get you organized and now we have spotted another useful schedule from Google.

Who needs a World Cup 2014 schedule PDF when you have this courtesy of Google which is available just after a few clicks? You’ll see that the timetable will show matches in Eastern Time for US audiences, but it can also display UK times too.

This clever widget works with Google.co.uk as well. Simply do the same Google search and you’ll see the same chart with the times changed for BST or British Summer time. The ending result is a 4PM Eastern Time kick-off time in the US for Brazil Vs Croatia and a 9pm kick-off time instead for everyone else in the UK. 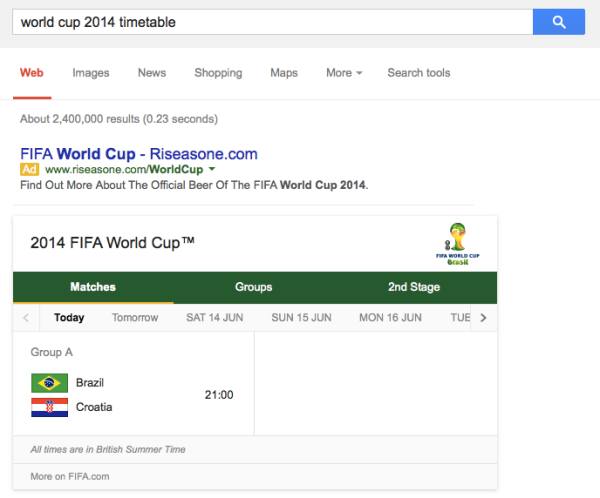 If you need a World Cup 2014 timetable for PST or Pacific Time, simply minus 3 hours to the EST chart to get the desired outcome. This is probably one of the best ways to keep track of the World Cup and don’t forget that this will work great with a tablet too.

Are you using Google’s search bar for your World Cup 2014 timetable?