We have something for those of you who are looking for a World Cup 2014 desktop wallpaper with a twist. A fantastic World Cup 2014 Periodic table is now available, giving an educational glance at the full World Cup 2014 schedule and timetable in visual format.

We have seen periodic tables for the World Cup before, but this one is arguably the best that we have seen for the 2014 FIFA World Cup so far. There is not long to go until the Brazil Vs Croatia kick-off time is live and now you can prepare in the best way by downloading a free periodic table for the tournament in Brazil.

It looks fantastic and you should be able to work out the format of how the periodic table is comprised in relation to the World Cup 2014 schedule after studying it for a few minutes. 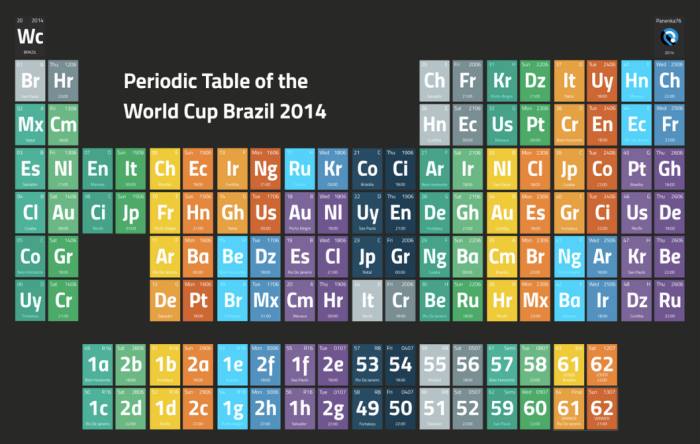 There’s also information on when the World Cup 2014 Semi-final and Final start times will begin and the location of the match. The question is though: Will your team make it through?

Let us know if you have already downloaded the World Cup periodic table. Do you have any other recommendations for a free World Cup 2014 desktop wallpaper?